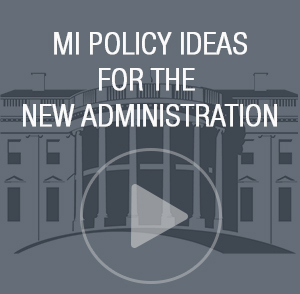 With the inauguration of President Donald J. Trump, Manhattan Institute presents policy ideas for the new administration on some of the most crucial issues facing America today. Check out our Issues 2016 page for even more policy prescriptions from MI scholars throughout election season.

Obamacare has made America’s $3.2 trillion health-care system more costly and bureaucratic, while still leaving many millions of Americans uninsured. To lower costs and improve care, a healthy dose of competition and deregulation is urgently needed. Here are four steps that Congress and the new Trump administration can take:

Thanks to the dramatic increase in domestic oil and natural gas production, the United States should pivot away from a goal of “energy independence” and instead flex its market power to reset the geopolitical status quo in energy. And, for the long-term future, finding alternatives to today’s necessary dependence on hydrocarbons requires abandoning failed research approaches. To advance these goals, Congress and the new Trump administration should:

There are many things to like about President Trump’s plan to encourage the private provision of infrastructure. Private firms have incentives to keep costs down. If the costs need to be covered by tolls and ticket fees, no one would build bridges to nowhere or empty monorails. If investors reap returns only over time, they have the right incentives to invest in maintenance.

But private provision is no panacea. In some cases, such as airports, privatization can be swift and relatively painless. Yet generous tax credits for privately built infrastruture—as proposed by Wilbur Ross, Mr. Trump’s nominee for secretary of commerce—leave real potential for abuse: when the users don’t need to cover costs, it is far easier to waste billions on unwise projects. Better to make tax credits dependent on project performance, as measured by property-value increases.

Unfortunately, privatization is unlikely to be the right recipe for America’s most important infrastructure investments: maintaining its existing stock. A better approach would have the federal government monitor infrastructure quality and tie federal support to maintenance.

It’s time for a fresh look at U.S. energy and environmental policy. An agenda that maximizes the potential of America’s natural resources while striking a better balance between industry and environmental protection could unleash substantial economic growth and job creation at no cost to taxpayers. Here are four steps that Congress and the new Trump administration can take:

With the Higher Education Act (HEA) overdue for reauthorization, reforming U.S. higher education will be on the agenda in 2017. The Trump administration should use this opportunity to zero in on some of the most urgent challenges, including the student loan repayment crisis; the lack of information on college quality; the financial aid system’s burdensome complexity; and misguided efforts to reintroduce private lenders into federal lending and incentivize public service. Here are five steps that Congress and the new administration can take:

To jump-start economic growth and increase employment, the incoming Trump administration and GOP-led Congress should make reforming America’s legal system a priority. In particular, they should move to curb lawsuit abuse, to reduce the regulatory threat placed on innocent businesses and individuals through the federal criminal law, and to fix shareholder voting to prevent special interests from foisting political agendas on companies outside the legislative process. Each of these reforms can be achieved in part without legislation, by reversing Obama-era administrative agency actions, though more lasting change would require congressional action.

The U.S. corporate tax rate, 35%, is the highest in the industrialized world, and the gap between American and foreign rates is widening, as foreign countries are lowering their rates. This high corporate tax discourages investment and economic growth. Most nations employ a territorial system, which taxes only their corporations’ domestic earnings. The U.S., however, taxes its corporations on their worldwide earnings. This puts U.S. companies at a competitive disadvantage and introduces far-reaching economic distortions.

In order to increase international competitiveness and economic growth, the new Congress and the incoming administration need to:

The United States has long been in the middle of the pack among developed nations in K–12 education. In 2015, scores on America’s National Assessment of Education Progress—a nationwide report card of student achievement—fell nearly across the board for the first time in decades. And in 2016, U.S. high school math performance on an important international indicator, the OECD’s cross-country PISA exam, declined precipitously, to 39th place out of 70.

This poor performance has occurred despite, or perhaps because of, the growing federal role in public schools. Incoming President Trump has promised to restore—and respect—state and local control of education. To accomplish this turnaround, here are two steps that Congress and the new administration can take:

After a bruising election season and historic turn of events, Donald J. Trump was elected the 45th President of the United States. Manhattan Institute scholars weigh in on the election's key issues ahead of the next administration, bringing policy back into focus in a special post-election series.

Bipartisan reforms can be enacted by Congress to supercharge medical innovation and deliver better cures to patients faster than ever before.

Washington must make it easier for students to navigate the financial aid system and help low-income students gain access to higher education.

In addition to supporting cops and telling the truth about policing, our leaders must tackle the true root cause of high-levels of crime: breakdown of the family.

Both parties in Washington need to come together to address the size and complexity of the federal criminal code, in addition to enacting a standard that requires criminal intent.