The Picket Line Makes a Comeback

Enraged by Trump and energized by the Janus ruling, unions turn to an old familiar tactic.

President Trump has been mostly quiet about the standoff between General Motors and the United Auto Workers. Since he’s known for building hotels and not consensus, that’s probably a good thing. But these labor disputes aren’t going away. Work stoppages have risen sharply in recent years and the number of workers who have been idled is approaching levels not seen since the 1980s.

The U.S. Labor Department reports that there were 20 major strikes in 2018, the most since 2007, and they are growing in size as well as frequency. Some 485,000 people were involved in labor strikes last year, the highest number in 32 years. The walkouts haven’t been limited to a certain industry or region. They’ve involved hospital workers, educators and hotel staff and have taken place in states as diverse as California, Oklahoma and Vermont. While public-sector unions have led the way, their private-sector counterparts have been agitating, too, as GM can attest.

On one level, this isn’t surprising. We’re in the 10th year of an economic expansion and unemployment is at a 50-year low. When labor markets are this tight, employees gain more leverage. Labor unions gamble that management will have a tougher time finding replacement workers in such an environment if their demands aren’t met. But something else may be going on here. In all of 2017 there were just seven major work stoppages in the U.S., the second-lowest number since 1947. Through September of this year, there had already been 20.

Part of this phenomenon can be traced to the 2018 midterm elections. In addition to gaining control of the House, Democrats flipped more than 300 state legislative seats and won gubernatorial races in key states that Mr. Trump had carried in 2016, such as Wisconsin and Michigan. These Democratic victories bolstered Big Labor’s already considerable political clout and mobilized union leaders everywhere.

The other major development was last year’s Supreme Court ruling in Janus v. Afscme, which held that government employees who don’t want to join a union can’t be forced to contribute money to it anyway. Public-sector unions became a major force in politics primarily because of laws and wrongheaded court decisions that allowed them to coerce dues from workers. The Janus ruling was a body blow, and labor leaders responded with work stoppages, expanded recruitment efforts and earnest attempts to frame their activism as a boon for society, not just themselves.

Randi Weingarten of the American Federation of Teachers said last year that her political agenda now extends well beyond the interests of educators. It’s also about “stoking a movement for social justice, for workers’ rights, for women’s rights, for civil rights,” among other causes. The AFT and its sister organization, the National Education Association, have millions of members and thousands of state and local affiliates. Since 2018 they have orchestrated walkouts in at least 10 states and dozens of school districts. When teachers in Los Angeles walked off the job in January of this year, sanctuary protections for illegal immigrants were part of the collective-bargaining negotiations.

These new tactics are currently on display in Chicago, where teachers in the nation’s third-largest school district are striking for the second time since 2012. The union wants higher salaries, of course, but it’s also demanding that any new contract address issues like crime and income inequality. The Wall Street Journal reports that the Chicago Teachers Union “has emphasized social issues during talks” and “wants the city to increase funding for affordable housing and for homeless liaisons to be provided in schools.”

Poverty, homelessness and illegal immigration are real concerns that deserve serious attention, but when public-sector unions want to make them part of contract negotiations over wages and benefits, something else might be going on.

Mike Antonucci, an education journalist who has been writing about teachers unions for decades, speculates that the CTU’s real concern is flagging membership. As the number of students enrolled in Chicago public schools has declined, so has the number of people the school system employs. The “big issue is staffing—more teachers, social workers, counselors, nurses, clinicians, case managers, librarians and restorative justice coordinators and 1,000 additional teaching assistants,” Mr. Antonucci wrote recently. “It is no coincidence that virtually all of these new employees would be eligible for union membership.”

The increase in school disruptions isn’t about poverty or homelessness or even students. It’s about expanding the reach of collective-bargaining agreements that give labor unions access to more taxpayer dollars without voter approval. And it’s about the desperate search for members in a post-Janus world where public-sector unions can no longer bully people into paying them. 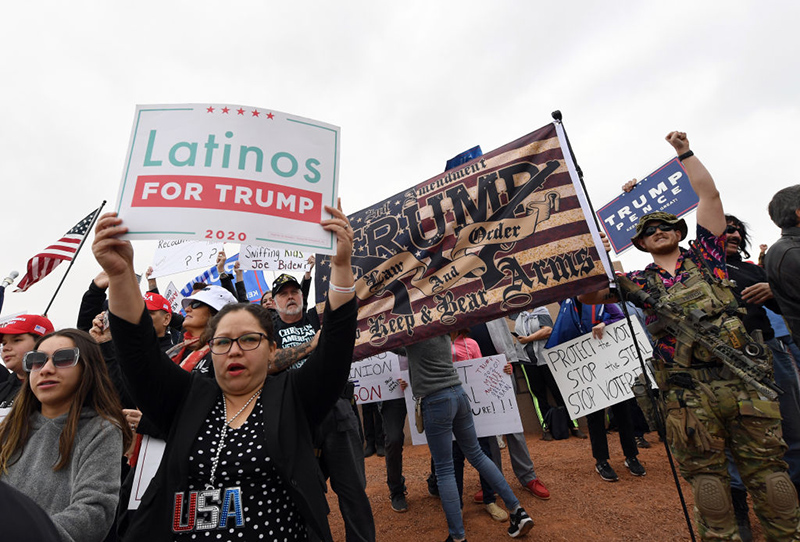 Blacks and Latinos for Trump