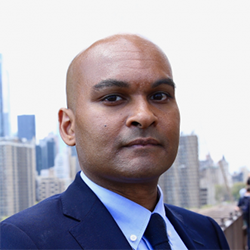 Reihan Salam is the fifth president of the Manhattan Institute. Since joining MI in 2019, Mr. Salam has overseen the creation and launch of a number of new initiatives, including the Policing and Public Safety Initiative, dedicated to addressing the nation’s crisis of urban violence. He has recruited a number of the nation’s leading scholars, journalists, and civic leaders to help foster economic opportunity, educational excellence, individual liberty, and the rule of law in America and its great cities.

Mr. Salam is the author of Melting Pot or Civil War? (Sentinel, 2018), the coauthor, with Ross Douthat, of Grand New Party (Doubleday, 2008), and a contributing editor at The Atlantic, National Affairs, and National Review. Before joining MI, Mr. Salam served as the executive editor of National Review and a National Review Institute Policy Fellow.