Editor’s note: Data on shareholder votes for America's 250 largest public companies during the 2019 proxy season can be found on the publicly available (and fully sortable) Proxy Monitor database.

Overall, in the 2019 proxy season, the average Fortune 250 company had 1.1 shareholder proposals on its proxy ballot. While 44% had none, ten companies faced four or more: Alphabet, Amazon, Chevron, Dow-Dupont, Duke Energy, ExxonMobil, Facebook, Pfizer, Verizon, and Walgreens Boot Alliance. Approximately 90% of these proposals involved environmental, social, or governance (“ESG”) concerns—with the fraction relating to traditional corporate-governance issues slightly exceeding that devoted to environmental or social concerns. The most commonly introduced type of proposal in 2019 (40 proposals) sought to separate the company’s chairman and CEO roles. None of these passed. The second-most common class of proposal involved company political spending or lobbying (34 proposals). 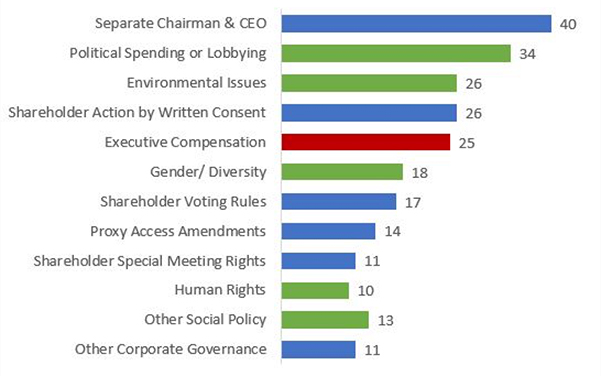 A plurality of all 2019 Fortune 250 shareholder proposals (44%) were sponsored by social-investing funds or other investors with a social, religious, or public-policy orientation. The three corporate gadflies in the self-styled “Chevedden group”—John Chevedden, Kenneth Steiner, and Mr. and Mrs. James McRitchie—sponsored 38% of all shareholder proposals. Chevedden himself sponsored 50 proposals, far and away the most of any single sponsor. (Steiner sponsored 18 the second-highest number.) 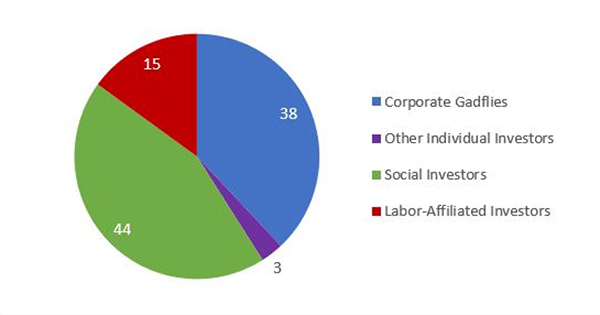 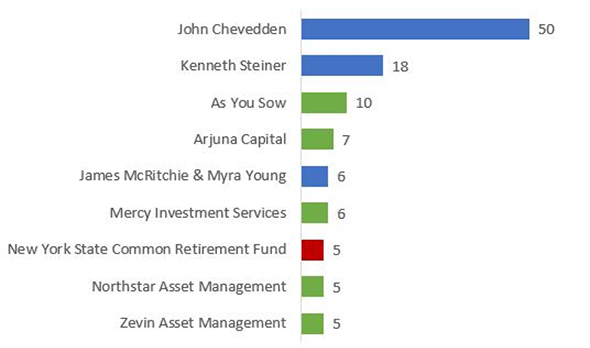 Only 6% of shareholder proposals received majority votes—down from 11% in 2017 and 10% in 2018. The decrease in majority votes is likely due to the broad adoption of more-popular proposal ideas (destaggering board elections, majority voting for directors, and proxy access) as well as issuers’ strategic concessions leading to proposal withdrawals. All but three shareholder proposals receiving majority votes have been governance-related proposals sponsored by the Chevedden-group gadflies. Six of these sought to eliminate supermajority voting rules, and two apiece sought to elect all directors annually, lower special-meeting thresholds, or allow shareholder action by written consent. Three social-issue proposals received majority shareholder votes: a proposal seeking a report on corporate political spending, at Cognizant Technology Solutions, sponsored by James McRitchie and his wife Myra K. Young; a proposal seeking a report on risks from opioid sales, at Wallgreens Boot Alliance, sponsored by the Catholic-affiliated Mercy Investment; and a proposal seeking a report on diversity, including EEOC data, at Travelers, sponsored by the social-investing fund Trillium Asset Management.