This year, the Manhattan Institute has been at the forefront of the nation’s most urgent policy debates. At the start of 2021, many believed that America was entering a new age of government activism. Yet as the year closes, discontent over the rush toward new entitlement programs, new regulatory mandates, and new taxes has become impossible to ignore. In major metropolitan areas, the breakdown of public order and soaring housing costs are driving a desire for policy change at the local and state levels. And across the country, the rise of race essentialism in school curricula, training programs, and other areas has provoked a powerful reaction from a multiethnic coalition of parents. With energy and creativity, MI’s scholars have been offering practical policy solutions to our most formidable challenges—and our audience and impact have been growing as a result. 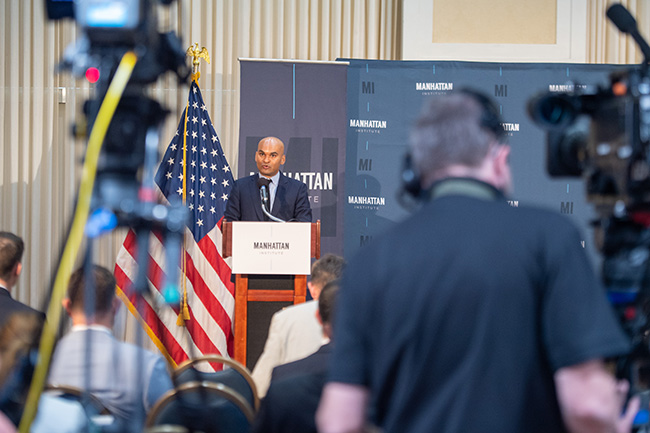 We begin this year-end update with a look at New York City. Not long ago, the conventional wisdom was that Mayor Bill de Blasio’s successor would embrace such causes as defunding the police, blocking the expansion of charter schools, socializing the city’s housing stock, and further expanding the unionized workforce. Throughout 2021, MI’s New York City: Reborn initiative made the case for a different approach, grounded in an embrace of proactive policing, expanding access to high-quality educational options, increasing housing supply, and boosting the efficiency of local government. Ultimately, voters in the city’s Democratic primary backed Eric Adams, the Brooklyn borough president and a veteran of the New York Police Department. Adams campaigned as a pro-business, pro-charter candidate who would invest in the NYPD, not defund it. With the city facing a sharp rise in shootings and homicides and an unemployment rate almost twice the national average, Adams’s pragmatism spoke to working- and middle-class voters in the outer boroughs, and he won a sweeping victory in November’s general election.

New York’s move to the center is part of a national trend, as evidenced by MI’s Metropolitan Majority effort. Drawing on a survey of 4,000 residents in 20 of America’s growing metros, we found that urban and suburban voters care about the basics: safe neighborhoods, more jobs, lower cost of living, and high-quality education. MI is uniquely positioned to speak to this multiethnic majority in our cities and suburbs.

Amid rising violence and disorder afflicting many American cities, a bipartisan majority of respondents expressed worries about crime—and a vast majority preferred that the police presence in their neighborhood either grow or remain the same. Throughout 2021, MI’s Policing and Public Safety Initiative played a crucial role in countering false narratives about policing and criminal justice, exposing the moral and intellectual bankruptcy of the “defund” movement. MI fellows engaged police leaders and prominent academics, publishing rigorous research and taking to op-ed pages and the airwaves to change the national conversation on crime and policing.

In Minneapolis, voters rebuffed a plan to dismantle the city’s police department. And in Seattle, the race for city attorney saw voters reject an avowed police abolitionist. As Americans search for answers on crime and disorder, MI will remain a beacon for solutions that can restore safety, vitality, and opportunity to communities around the country. 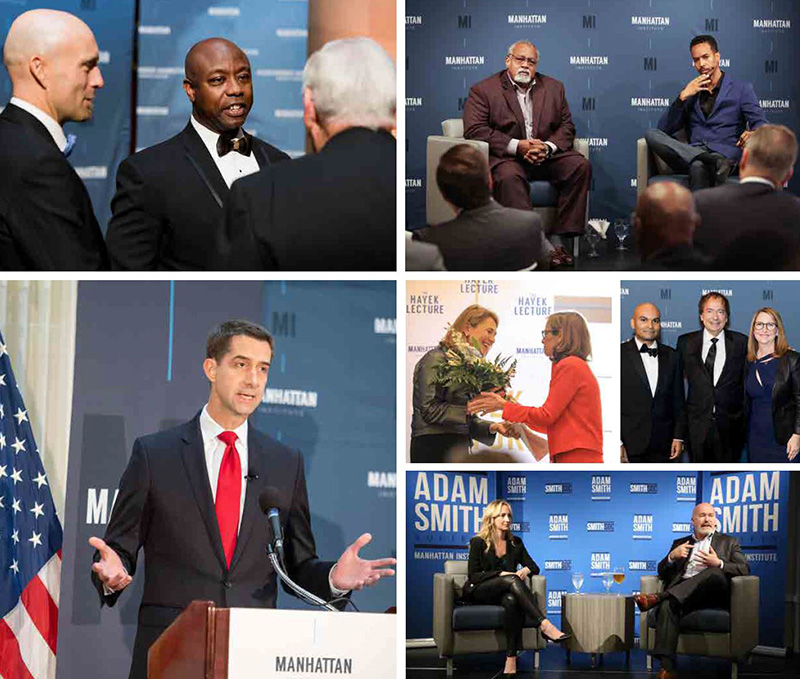 Perhaps no issue dominated headlines late in the 2021 election cycle as much as education. Our survey of metro residents found majority support for school choice and charter school expansion, as well as majority opposition among black, white, and Hispanic parents to the teaching of lessons based on critical race theory (CRT) in public schools. These results augured the breakout of the Parents Matter movement, which proved pivotal in Virginia’s gubernatorial race. A diverse assemblage of parents and other concerned voters, the movement is rooted in ideas that embody MI’s work on education policy and identity politics: that race essentialism is corrosive, that schools should be accountable to parents, and that school choice is key to providing families with higher-quality educational alternatives.

MI will continue to advocate for educational pluralism, accountability, and local ingenuity. And MI will continue to lead the way in turning the tide on divisive identity politics, building a broad-based coalition that values America’s diversity but recognizes that it is wrong to define someone’s character or culture based on skin color.

Finally, our survey highlighted significant anxiety about the availability of jobs and affordable housing, as well as dissatisfaction with the high cost of living and excessive tax burdens, particularly in America’s coastal metros. These concerns were reflected in the shockingly close race for governor in New Jersey, and they will only be compounded by problems at the national level, where the combination of global supply-chain disruptions and Washington’s seemingly insatiable appetite for fiscal expansion is creating inflationary pressures and unsustainable debt burdens. As always, MI will push back on ineffective and unaffordable federal spending, and we will make the case for fiscally prudent energy, health, and economic policies that unleash the private-sector dynamism necessary to drive economic growth.

Thank you for your support of our mission, which makes possible all the important work that you will read about in the following pages. We at MI are eager to work with you in the year ahead on our shared commitment to advancing economic choice and individual responsibility in America and its great cities. I wish you and your family a joyous holiday season. 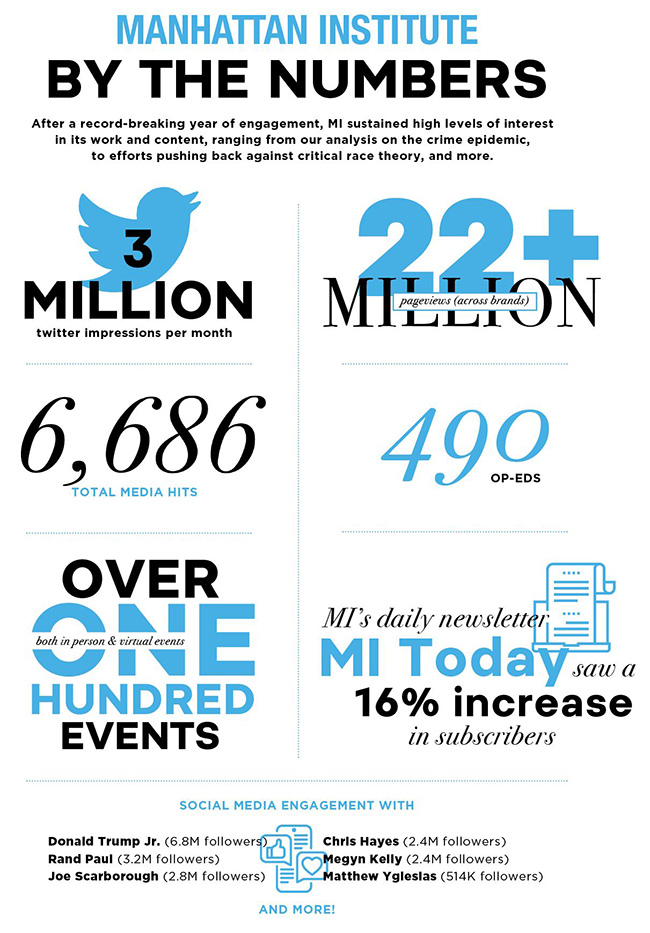