America’s 50 largest metros alone account for half the country’s population, more than half its votes, and two-thirds of its economy. Unsurprisingly, today’s most pressing issues, from the pandemic to civil unrest and economic distress, are playing out in our cities and suburbs. Across these metros, there is a multiethnic mainstream of voters who value safety, good jobs, and a good education for their children. Building on the success of its NYC: Reborn initiative, MI launched Metropolitan Majority in September—an effort focused on cultivating a national network of pragmatic local leaders and sharing the best policy solutions to problems in metros across the country. 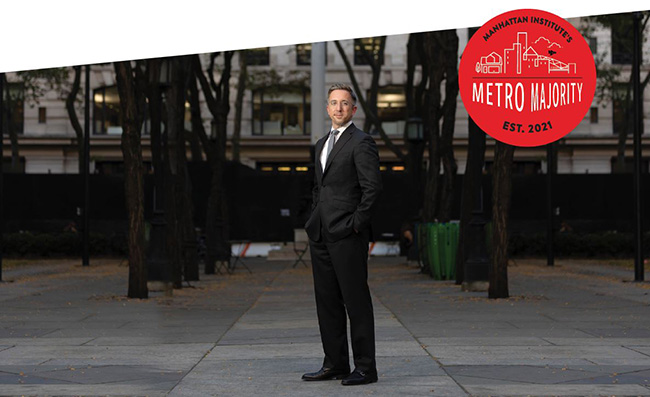 Led by state and local policy director Michael Hendrix, MI scholars will traverse the country to share policy insights and learn how local leaders are employing innovative solutions to the challenges facing their cities. Our first stop was Austin, Texas, where local leaders met to discuss the multifaceted challenge of homelessness and the range of policies necessary to address it. The initiative will also include virtual stops—for example, Michael Hendrix recently sat down for a video discussion with Tulsa mayor G. T. Bynum about the importance of public safety and economic opportunity in maintaining globally competitive cities.

America’s 50 largest metros alone account for half the country’s population, more than half its votes, and two-thirds of its economy.

Like NYC: Reborn, Metropolitan Majority will be informed by original polling. The first poll, carried out by Echelon Insights, surveyed adults in 20 of America’s fastest-growing metropolitan areas to understand their priorities, concerns, and opinions on key policy issues. Respondents had a broad array of ideologies, ethnicities, and living patterns, but on many important local issues—growth, housing, public safety, and education—a diverse majority coalition emerged.

Respondents’ top concerns were the cost of housing and homelessness. More than half were extremely or very concerned about crime and high taxes as well. And most respondents were at least somewhat concerned about a lack of police presence, about the quality of local schools, and about ideologically charged “critical race theory” in school curricula. Most of these are not highly partisan issues; they are simple but fundamental matters on which government policy can make urban dwellers’ lives better—or worse.

In the coming year, MI scholars will—via research, events, and commentary—drive the policy discussion on the issues that matter most to America’s metropolitan majority. Hendrix will develop a land-use and housing-policy playbook tailored to metros in “red” states; Connor Harris will lay out the policy changes needed to improve the performance and cost-effectiveness of transportation infrastructure; and Daniel DiSalvo will explore how the Supreme Court’s Janus decision has affected the public-sector unions that play an outsize role in city elections, operations, and budgets.

In the age of Zoom, cities can no longer take growth for granted. Progressive overreach on schools, taxes, regulation, and criminal-justice reform has put too many cities at risk of losing the residents and dynamism that made them engines of creativity and prosperity in the first place. There is now an important opening for practical, evidence-based policy ideas that can revitalize the social, cultural, and economic life of cities—and it is an opening that MI will continue to take the lead in filling through the work of its NYC: Reborn and Metropolitan Majority initiatives.