Mark P. Mills is a senior fellow at the Manhattan Institute, specializing in energy and tech policy—and he has had a very busy, productive, and influential year.

Mills is the go-to resource for lawmakers seeking to understand realistic energy policy. His paper on mineral dependencies last year helped inform an executive order on the subject. In October 2021, Sen. John Barrasso quoted testimony that Mills had given regarding the sheer quantity of refined materials that are required to create such things as electric-vehicle batteries—at a time when policymakers want to transition to clean energy and yet are contemplating banning mining on federal lands. 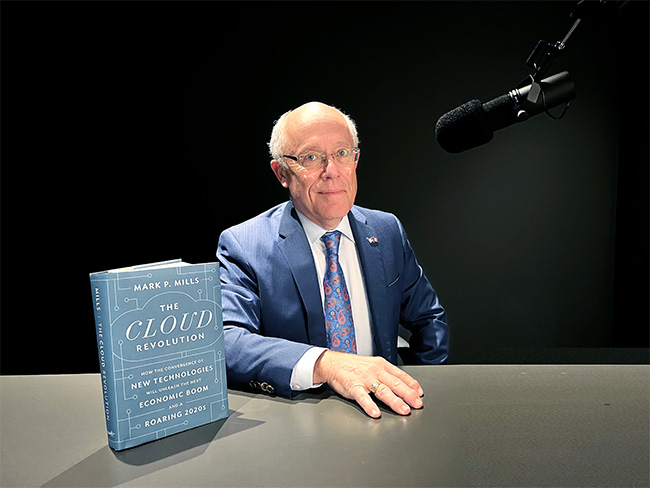 Mills has just published a new book, The Cloud Revolution: How the Convergence of New Technologies Will Unleash the Next Economic Boom and a Roaring 2020s. We asked Mills what we should expect from this new work.

There’s a lot of pessimism about tech and the economy right now. Some worry that automation is going to take all the jobs, and some think that we’re in a period of stagnation. But here you are promising a “roaring 2020s,” thanks to great new technologies. What’s your theory here?

Mark Mills: My theory is that our near-term technological future is not about what’s just been invented or discovered, or what we hope might yet be invented, but instead will come from the constellation of earlier inventions that engineers have only recently made commercially viable. The internal combustion engine was invented in 1876, but it was three decades before the proliferation of personal cars. My book is a map of the innovation landscape in terms of foundational changes in three core domains: materials, the kinds of machines we use to build and operate everything, and our ability to advance our knowledge about all of it. Unique to our time, we have the rise of the Cloud, the newest and soon to be biggest infrastructure that humanity has ever built, which amplifies and accelerates innovation everywhere.

What are a few tasks that you expect tech to accomplish much better in 2030 than it does today, and how will that affect the relevant sectors of the economy?

MM: It may sound ambitious to say, but pretty much every sector, though in varying degrees and at different velocities. Some of the biggest changes coming are in health care and job training. Both fields have been stubbornly resistant to meaningful efficiency gains. Now we’re seeing radically new possibilities in health care, from the combination of biocompatible sensors that can yield far more granular personal and real-time health data, along with AI-assisted diagnostics enabling precision medicine and the supercomputer-accelerated development of therapeutics. Training and re-skilling will benefit from hyper-realistic simulators, a technology that was pioneered for aviation and is on the cusp of a radical drop in costs—as well as a leap in realism.

How do your predictions play into fears of automation, job loss, and inequality? Are the new jobs created going to be mostly for highly educated tech specialists?

MM: It’s true that technology and automation eliminate many types of jobs. But for the first time, the technology eliminating many kinds of jobs, AI and the Cloud, is also a tool for re-skilling citizens for the new jobs. And the AI-infused Cloud will also automate and democratize many of the skills formerly reserved for the more highly educated. Put simplistically, AI will reduce the number of managers needed to oversee a fleet of trucks far faster than it will replace the truck drivers.

MM: The conventional wisdom from the “new normalists” is that America’s GDP growth will average below 2% per year for the decade. But if the Cloud revolution pushes growth instead to just 3% a year—never mind the heydays of 4%–5%—in 2030, America will have trillions of dollars’ worth of extra money (cumulatively, tens of trillions by then) to try to more fairly distribute. I’ll be wrong if in the next five years, we see levels consistently below 1.5%—but only on timing. I’d still bet on my thesis happening, but slightly further into the future. The underlying forces that will drive another boom in productivity are indisputably there.

A big element of your theory is that to really revolutionize things, you need a confluence of technologies that work together in important ways. Can you point to examples from history of this being the case?

MM: Exactly. The idea of a handheld computer, for example, was pretty old, but it took a confluence to realize. Arthur C. Clarke forecast such a thing back in a 1962 interview, and even though early attempts appeared around 1990, it wasn’t until 2007 when the Apple iPhone ignited the rise of the mobile Internet. The iPhone was made possible by the contemporaneous maturation, in performance, price, and reliability, of three classes of technologies, none of which Apple invented: the microprocessor for the logic and for the radio chip, the tiny high-resolution color LCD screen, and the lithium battery. There are dozens, even hundreds, of similar examples. The automobile, for example, required the maturation of the internal combustion engine, high-strength steel, and petroleum refining.

While technology has improved in recent decades and made our lives better in some ways, many think that the advances feel hollow—we’re depressed and scrolling through our social media, or spending too much time playing very realistic video games. Do you think that the next wave of technology will feel different to the average person?

MM: Over most of history, most humans spent most of their lives occupied by things needed just to survive. Now the wealth, comforts, conveniences, and free time unleashed by technology have freed up lots of time. It’s true that many people fill that time with what some of us think is irrelevant, silly, or even depressing. But consider the alternative. And yes, I do think that the next wave of technology will feel different. A lot more of what’s coming next will touch on how we can make our lives healthier, more comfortable, convenient, safer, and, relevantly, wealthier.