The Manhattan Institute partnered with Echelon Insights to conduct a July 2020 survey of New York City adult residents in order to better understand their feelings about issues facing the city, views on city government, and attitudes toward potential policy solutions. The results show a city divided and pessimistic—especially among those least able to afford the city—and consistent support, across partisan divides, for certain reforms. In the wake of urban unrest and the global pandemic of Covid-19, New Yorkers are split on the state of their city. At best, they see it as average: quality of life, government responsiveness, and public leadership receive a resounding “meh.” Governor Andrew Cuomo is popular—strikingly so—while Mayor Bill de Blasio splits opinion and lacks a passionate base.

Remarkably, two in five New Yorkers say that they would leave the city, if they had the ability to live anywhere they wanted. Those most able to afford New York City are the most willing to stay. Indeed, almost across the board, high earnings and education appear to increase satisfaction with the status quo. The desire to leave is especially strong among outer-borough residents. Minority ethnic groups are dissatisfied with the state of New York City and support a host of policy reforms.

The most popular attributes of New York City are also the ones most threatened by the current pandemic. The Metropolitan Transportation Authority (MTA) is popular among respondents but is facing a financial crisis from an unprecedented drop in ridership. Nearly a third of New Yorkers still see an opportunity to get ahead and improve their circumstances in the city, even as one in five New Yorkers is unemployed. Most New Yorkers still say that public safety is good to average, but shootings and murders are beginning to spike after a decades-long decline in serious crime. A clue to growing worries of public disorder may be found in the plurality of respondents worried about a lack of cleanliness.

The state of the economy and public safety are the two leading worries for New Yorkers. This is unsurprising, given recent events, but nevertheless a confirmation that protests and lockdowns have made their mark on Gotham’s residents and will likely shape the next mayoral election in 2021. Pocketbook issues also reign, with residents worried about the cost of living and housing as well as how much they pay in taxes. New Yorkers do not believe that city services are worth what they pay in taxes and would rather shrink the size of government than raise taxes.

New Yorkers would largely support a pragmatic, growth-oriented agenda for the city. That includes making government leaner and more efficient as well as reducing regulations that stand in the way of new businesses or housing. Many New Yorkers support more choice in education as well as selective public schools. Amid cries to defund the police, New Yorkers still want uniformed officers engaging in community-based policing. They also favor giving judges the freedom to factor in the risk of re-offense in offering bail, something that the state’s recent changes to its bail law disallow.

The State of the City

New Yorkers are split on whether they think the city is heading in the right direction, with 46% saying that things are on the right track and 42% believing that the city is on the wrong track (Figure 1). Wealthier residents are likely to have positive sentiments about New York’s future (54% for those earning more than $125,000), as are younger respondents (53% for those 18–29 years of age) and highly educated respondents (53% for those with a graduate degree). Unsurprisingly, those believing that New York City is heading in the wrong direction are the most likely to want to leave the city entirely (56%). And a resounding 63% of Republicans see New York on the wrong track, compared with 38% of Democrats and 39% of independents.

Many believe that quality of life in the city is average (Figure 6). Wealthier New Yorkers have the most positive sentiment (41% good or very good), in contrast to those who are unemployed or looking for work (34% poor or very poor) or who find the city unaffordable (42% poor/ very poor). Indeed, positive views of quality of life and the opportunity to get ahead rise with increases in income (Figure 5).

Governor Andrew Cuomo’s job approval is high (73%, compared with 21% disapproval) and intensely so, while Mayor Bill de Blasio’s support is split down the middle (45% approval to 46% disapproval), with few strongly championing him (Figure 2). Indeed, 28% of New Yorkers strongly disapprove of Mayor de Blasio. Support for Cuomo is highest among black New Yorkers (84% approval, compared with 64% for de Blasio). Mayor de Blasio is weakest among white New Yorkers (45% indicating strong disapproval). New Yorkers are split into thirds on whether they feel the city government’s responsiveness is good/ very good, average, or poor/ very poor. Three in 10 people who say that they want to move far from New York City rate the city government’s responsiveness as “very poor.”

There are clear demographic divides between those who would stay and those who would leave. Whites are far likelier to say that they would prefer to move far away from New York City (22%) than black residents (12%). However, 47% of Hispanics and Latinos would leave the city, the largest share of any racial group. Nearly half (49%) of those who say that they align with the GOP would leave, while more than half (55%) of Democrats would stay in New York City. Those with a graduate education or earning more than $125,000 a year are also more likely to desire to stay (66% and 59%, respectively). And Manhattanites report a greater desire to stay in the city (66%) than do those in the outer boroughs, particularly the Bronx (47% would either move nearby or leave entirely) and Staten Island (26% are interested in leaving entirely, with the lowest share of respondents who are unsure of their answer).

The Best of the City

While most attributes of life in New York City receive slightly negative reviews, there are two areas where more New Yorkers say that things are “good” than “poor” (Figure 4). Public transportation is viewed positively in the city, with 37% percent saying that it is good or very good, and the MTA has a strong approval rating of 60%. Additionally, more New Yorkers believe that their prospects to get ahead and improve their circumstances are good or very good (31%) than say that they are poor or very poor (25%).

Meanwhile, 35% of New Yorkers view both public safety and public schools as average, with the remainders leaning negative. Nearly half of those who claim public safety as their top issue rate it poorly. Public safety is a leading concern for residents of the Bronx (40% poor or very poor) and those aligned with the GOP (51%). Residents for whom public safety is a top priority are also more likely to say that they would prefer to leave the city if they could (the same share as those who name the economy as their top issue). Only a little over a quarter (26%) of New Yorkers say that public schools are good, though public school parents are somewhat more positive (36% very good or good, versus 31% very poor or poor). Bronx residents give public schools lower ratings than do residents of other boroughs (36% very poor or poor).

By contrast, more than half of New Yorkers (53%) approve of the New York City Police Department (NYPD) (Figure 2). That said, views of the NYPD are split along racial lines; approval is lowest among black New Yorkers, more than half of whom disapprove (51%), compared with 59% approval among whites and Asians and 51% approval among Hispanics. (By contrast, negative views on public safety are much less divided by race.)

Women are more likely than men to believe that race relations are poor, particularly those who are over the age of 50, single, or earning less than $50,000 a year.

The city’s economy is viewed as poor or very poor by 36% of New Yorkers, while 37% say that it is average and only 22% say that things are good or very good. This seems a surprisingly strong result, considering the broader state of the economy; at the time of this survey, unemployment was hovering around 20% in New York City, and New York State was tied with Nevada for the nation’s worst statewide decline in GDP for the first quarter of 2020. Dissatisfaction with the economy is higher among women than men (41% to 31%) and also with Hispanic/Latino respondents, compared with other racial groups. Those with higher incomes rate the economy more positively.

For those making less than $30,000 a year, just 25% believe that city services are worth what’s paid in taxes (with roughly a quarter unsure), compared with 41% of those making more than $125,000 annually. Cleanliness is also viewed as something of a problem, with only 24% saying that cleanliness is good or very good in New York, while 37% say that it is poor or very poor. Of those who say that they would move far away from New York City, 50% rate cleanliness as poor or very poor.

Of all the policy ideas tested in this survey, lowering taxes is the most popular, with 75% saying that they would support lowering city taxes, including 47% who say that they would strongly support such a move (Figure 11). Support for such a move is high and consistent across all demographic groups and areas of the city. By contrast, when asked what New Yorkers would want to do to address the city’s fiscal issues, “raise taxes” is the least popular response, at only 11%.

A plurality of respondents (33%) aren’t sure how they’d handle the city’s fiscal issues. With the exception of raising taxes, which has very low support, all the options tested similarly: “cut some programs and services” (20%), “pay city government employees less” (18%), and “lay off some city government employees” (17%) are all preferred to raising taxes. Opinion was also fairly consistent across demographic groups.

More than two-thirds of New Yorkers were in favor of reducing regulations on small business as well as community policing (68% each), with support for the latter being high across races and ethnic groups. Specialized high schools available to those who tested well on entrance exams received 68% support. New York parents with children in the city’s public schools were more likely to support school choice than the broader population. School choice enjoys the highest support from Hispanic/Latino respondents (84% support), followed by blacks (72% support), and the lowest among Asians (55% support); support is also highest among those with smaller incomes and less education as well as those with children (Figure 10).

Other proposals met with slightly more opposition or uncertainty but still received support from a majority of New Yorkers, including loosening land-use regulations (59% support), factoring risk of re-offense into bail reform (55%), and limiting union collective bargaining over public pension liabilities (51%). Unsurprisingly, retirees (38%) and men over the age of 50 (34%) are most likely to oppose union reforms addressing retirement. On bail reform, pluralities of all racial/ethnic groups support factoring in the risk of re-offense in judges’ decisionmaking for pretrial release, though there was more uncertainty among respondents in nonwhite groups (Figure 13). Moderate opposition to land-use reform consistently rose with increases in education; it is also the only subject receiving more support from Democrats than from Republicans, with strong opposition centered on Staten Island. Black and Hispanic New Yorkers are more likely than other ethnic groups to support loosening these housing regulations. 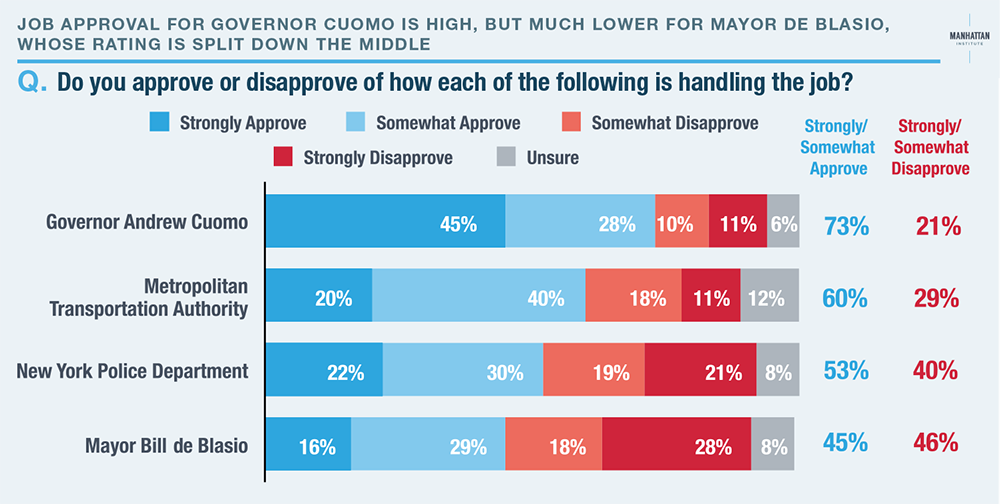 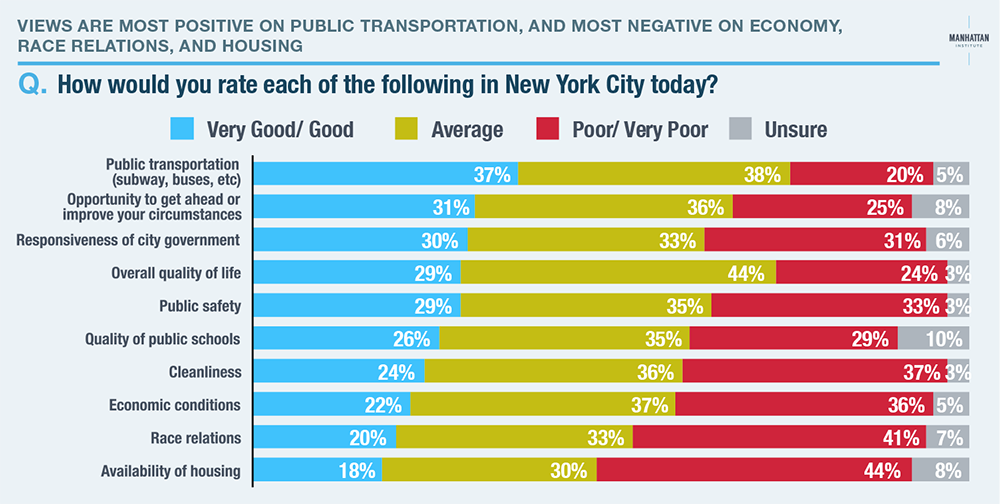 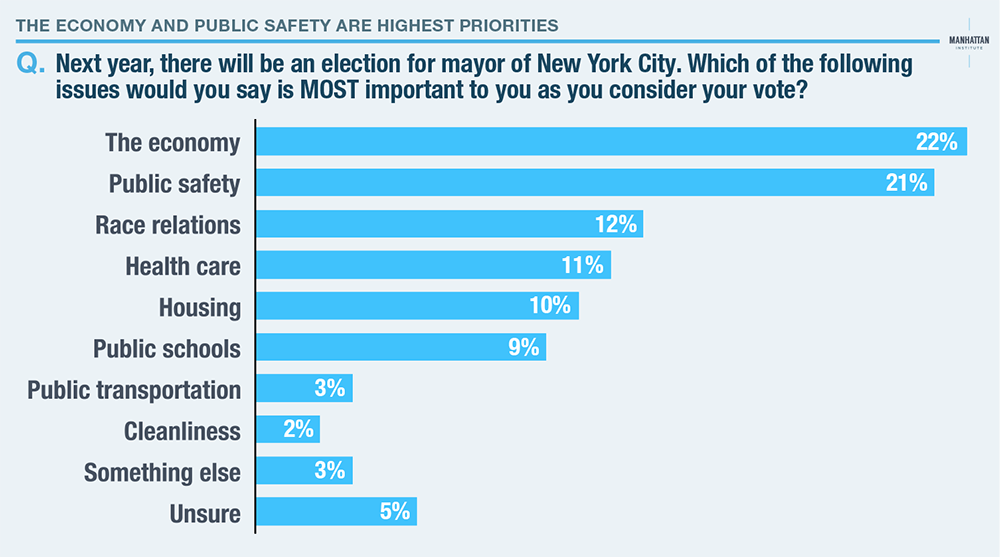 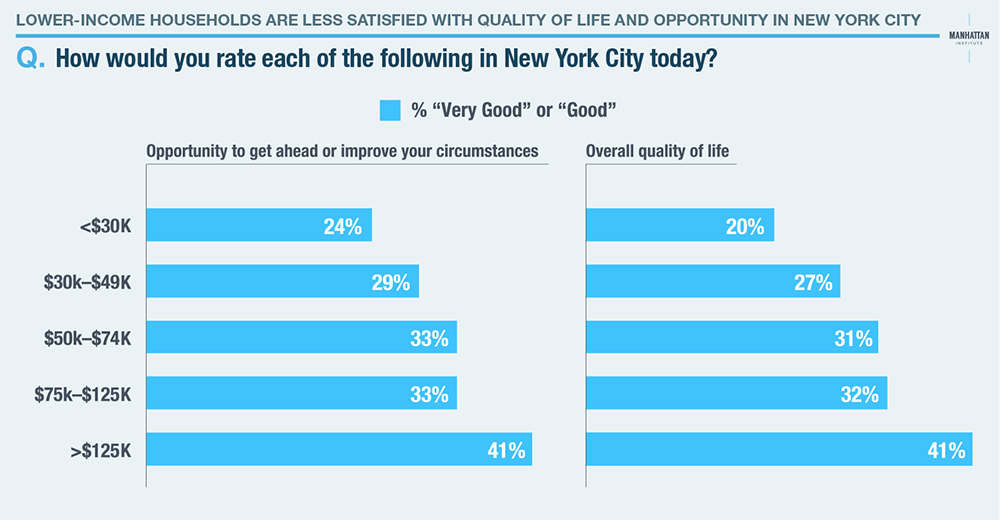 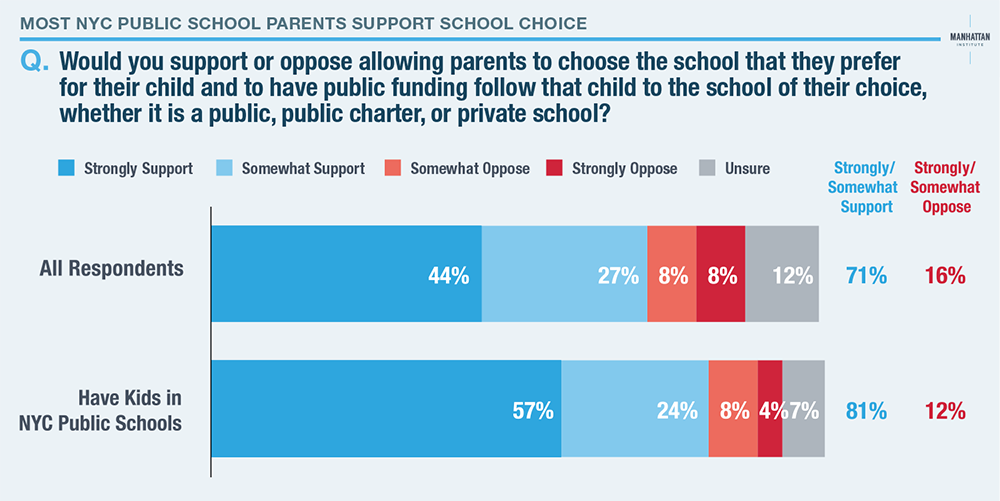 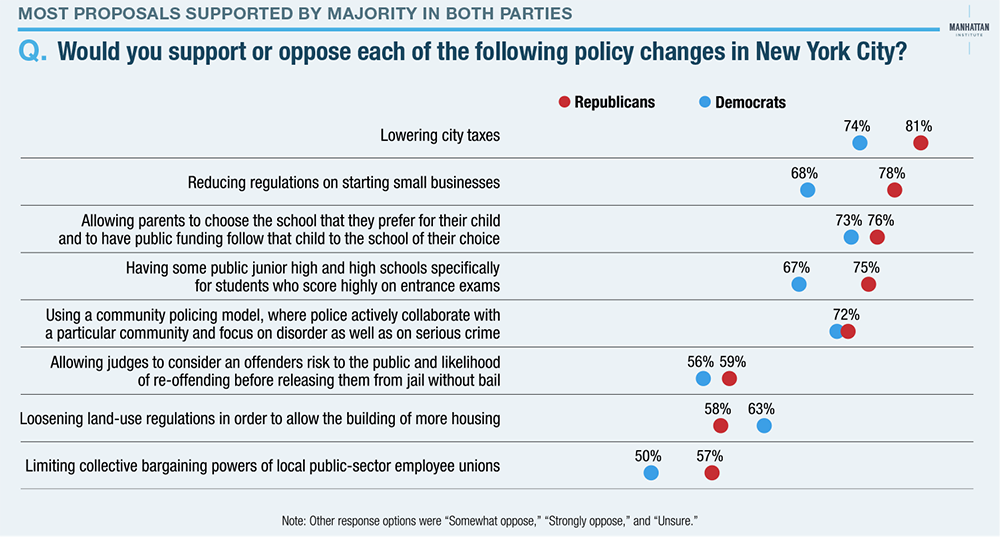