Automation refers to the substitution of technology for human labor. As tasks become automated, fewer people are required to produce a given amount of output each hour—in other words, each worker becomes more productive. That rising productivity is the mechanism by which workers’ wages rise over time and society as a whole becomes more prosperous. The same thing happens when a firm invests in training that allows each worker to produce more. No one says that training “destroys jobs.”

Economists track output per worker, or productivity, in each industry and economy-wide. Productivity growth has been slowing for decades and stands at a record low in the 2010s. What has changed for workers is not a sudden productivity surge that has left their labor unneeded, but rather a slowdown of growth in the economy’s output. Historically, as workers became more productive, firms expanded. The same workers, or even more workers, created more and better goods and services for society to consume. If that trend were continuing, America would have more manufacturing workers today than in 2000. If anything, America has fallen behind in automation and much greater technological progress will be needed to re-establish its industrial strength and generate strong growth for workers.

1. Manufacturing employment would be near an all-time high, with six million more workers employed, had the industry’s output growth this century kept pace with its 1950–2000 rate.

2. The U.S. is far behind other developed countries in robot adoption and continues to rely as heavily on production-line workers as decades ago.

3. Forecasts of future automation suggest the rate of progress will be no faster than in the past.


Automation Is Not What’s Hurting Workers

Automation has been a feature of human society since humans first used tools. Alongside enhanced skill and process improvement, automation is one of the fundamental mechanisms by which producers of goods and services increase the output that each worker is able to generate. Such increases, in turn, are what allow wages to rise and each member of society to enjoy an ever-higher material living standard.

The idea that automation “destroys jobs” has intuitive appeal because machines have a physical presence and robots can be anthropomorphized. But it makes no more sense than claiming that a new training program “destroys jobs.” In all cases, one implication of improving a worker’s productivity is that fewer workers will be required to do the same work as before. The effect on employment, however, depends on what happens next: do firms take advantage of the productivity gain to expand their output from the existing workforce, or to maintain their output and reduce their workforce?

Historically, productivity gains and output increases have gone hand in hand. For instance, from 1947–1972, economy-wide productivity increased by 99%—only half the workers were needed by the period’s end to produce as much as at the period’s start.[4]  In the terms of the current debate, progress had destroyed half of all jobs. But the period is known for its prosperity, not its mass unemployment, because as productivity increased America produced more stuff. In 1972, the same share of the population was working,[5]  and men’s median income was 86% higher.[6]

After rising from 14.3 million in 1947 to 17.7 million in 1972, employment in the manufacturing sector held steady between roughly 17 million and 19 million from 1972–2000. This happened despite rapid productivity gains throughout the period—average annual rates of 3.4% in the first period and 3.1% in the second—because the real value added by the sector rose steadily as well—rates of 4.2% and 3.0% respectively (Figure 1). Then, despite no change in the rate of productivity growth, manufacturing employment fell by nearly five million jobs from 2000 to 2018. The economic record does not suggest that technological progress accelerated at all. What happened was that output stalled, rising at only 1.3% annually. The resulting disconnect—workers becoming more productive but that productivity no longer going toward output growth—produced the catastrophic job loss. Had output growth continued at its 1950–2000 rate, manufacturing sector employment would be near an all-time high in 2018.[7] 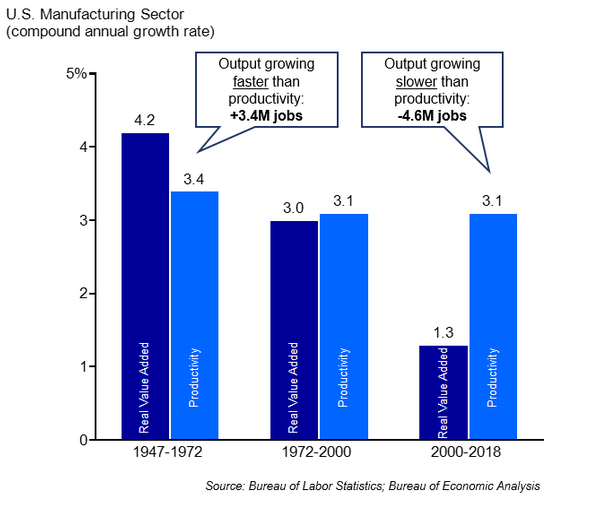 Nor does the economic record suggest that productivity growth within the manufacturing sector is occurring because machines are replacing workers in automatable tasks. If such replacement were the major trend, the ratio of “production and nonsupervisory employees” to managers should decline as still-human managers increasingly oversee machines. Yet, while that ratio once declined by more than half within a 25-year period, from 6.8 production workers per manager in 1947 to 3.2 in 1972, the most recent 25-year period has seen barely any decline at all. In 1993, the manufacturing sector had 2.6 production workers per manager. In 2018, the figure still stood at 2.3.[8]  The U.S. trails badly behind its international peers in the adoption of automation technology, using approximately 200 robots per 10,000 manufacturing workers as compared to 308 in Japan, 322 in Germany, and 710 in South Korea.[9]

Evidence from Other Industries: Retail and Transportation

The retail and transportation industries have also become popular targets for fears of technology-driven job loss. Retail employment exceeded 15.83 million in 2018, down fewer than 20,000 jobs from the record of 15.85 million set in 2017. As a share of the private-sector workforce, retail has fallen from a high of 14.6% in the late 1980s to 12.5% in 2018, but most of that decline occurred before the Great Recession’s onset in December 2007. As with manufacturing, the trend in retail’s ratio of nonsupervisory workers to managers gives no indication that less skilled, automatable jobs are facing particular pressure: Whereas the ratio fell from 9.3–1 in 1972 (the first year for which data is available) to 5.8–1 in 1993, it has changed little since and stood at 5.9–1 in 2018.[10]

Further, these data account for losses in brick-and-mortar retail but overlook many of the offsetting gains in e-commerce, which are often counted as jobs in transportation and logistics. The Progressive Policy Institute’s Michael Mandel estimates that the e-commerce sector created nearly 400,000 jobs counted outside the “retail” category from 2007–2017, as compared with a loss of fewer than 100,000 jobs in traditional retail. Those new e-commerce jobs also tend to pay better and are less likely to be located in high-cost-of-living urban centers.[11]

The transportation sector has not yet experienced employment declines, but the purportedly impending introduction of self-driving vehicles is cited frequently as a threat to millions employed as drivers today. Experts within the industry once amplified that chorus. No longer.

Instead, after years of research and development and then initial attempts at deployment, the consensus now holds that vehicles will achieve autonomy only gradually, likely over the course of decades, and perhaps never be truly driverless. “Show me an autonomous system without a human-in-the-loop and I’ll show you a useless system,” says Maarten Sierhuis, chief technology director at Nissan’s Silicon Valley research center.[12]

In 2014, Google aimed to have a “fully autonomous car” by 2017–20,[13] but its project lead, Chris Urmson, made headlines two years later when he said at the SXSW technology conference: “How quickly can we get this into people's hands? If you read the papers, you see maybe it's three years, maybe it’s 30 years. And I am here to tell you that honestly, it’s a bit of both. … This technology is almost certainly going to come out incrementally.”[14]  Urmson left Google later that year but now runs another company in the field and still believes that “you’re going to see small-scale deployments in the next five years, and then it’s going to phase in over the next 30 to 50 years.”[15]

The new head of Google’s effort, now called Waymo, has a similar view. “Either the human in the car needs to pay attention—that’s driver assist—or the human in the car doesn’t need to pay attention—and that’s autonomy. And that autonomy, I think, is always going to have some constraints on it,” said John Krafcik at the end of 2018. “We’re going to expand this, step by step, little by little, because again I want to come back to this point this is a very long journey, it’s a very challenging technology, and we’re going to take our time.”[16]

The realization that autonomous vehicles will gradually enter society over the course of decades, not throw millions of people out of work a few years hence, applies to technological progress generally. While the simplest components of jobs (that is, tasks) can often be automated easily, more complex components must wait longer. Typically, the human element cannot be removed entirely. Thus, while some attempts to forecast imminent collapse of the labor market describe a large share of jobs vanishing in the coming years, more careful studies emphasize the share of tasks within each job that are susceptible to automation—a dynamic that foretells much less disruption and, crucially, accrues to the benefit of workers who are still required in the picture but can produce much more in partnership with new technology.

Perhaps the most cited forecast for disruptive automation comes from a study by Carl Benedikt Frey and Michael A. Osborne of Oxford University, which produced the eye-popping estimate in 2013 that 47% of American jobs would be automatable within “a decade or two.” The study treats each occupation as something that either can or cannot be done by a machine, and credits technology with rather extraordinary capabilities: tour guide, real-estate agent, and fashion model are considered among the most likely jobs to be automated. Considering occupations instead of tasks leads to bizarre results like a prediction that school bus drivers will be easily automated—as if parents would place their young children in self-driving metal boxes without adult supervision each morning.[18]

By contrast, both McKinsey & Company and the Organisation for Economic Co-operation and Development (OECD) studied the tasks associated with each occupation and determined the share of tasks that could be automated within a job as distinct from the share of jobs that could be automated entirely. The OECD analysis concluded that only 9% of U.S. jobs were highly automatable;  McKinsey estimated that technology already demonstrated in a lab could automate only 5% of jobs entirely.[19]  Looking across all tasks, McKinsey estimated that half could be automated by 2055. If those tasks accounted for half of all work done each year, their automation would equate to a doubling of economy-wide productivity; half as many workers could do what the entire workforce does today. But recall, the same thing occurred in just 25 years from 1947–1972. If it occurred over the 38 years after McKinsey made the forecast in 2017, the per-year rate of productivity growth would be only 1.8%, at or below the economy’s long-run average.[20]

America’s MBAs are the Latest Skeptics of Capitalism