Legislation tells only part of the story about how the federal government regulates the conduct of American individuals and businesses. The executive branch has significant authority to enact policy changes on its own through the maze of statutes that Congress has already enacted that grant it discretion. Since the federal government began itemizing its new rules in 1976, more than 200,000 have been added to the Federal Register.[1

Formal administrative rulemaking, moreover, does not fully capture the power of the executive branch—which exerts authority through White House–issued executive orders, informal enforcement directives, and advisory opinions. The Biden administration will undoubtedly reverse course in administrative rulemaking—much as the Trump, Obama, and Bush administrations shifted away from the policies of their predecessors. Based on campaign promises and early executive orders, the incoming Biden administration can be expected to reassess how colleges handle issues of sex, sexuality, and gender identity;[2] to engage in more sweeping environmental rulemaking;[3] and to launch new civil rights investigations of local police departments.[4]

In general, such shifts, whatever the policy merits, are legitimate. But it matters how these policy shifts are effectuated. While the broader legitimacy of much of the administrative-rulemaking apparatus is itself a subject of vigorous debate, agency rules are most defensible when they follow the open and transparent process laid out by Congress in the 1946 Administrative Procedure Act (APA): public notice before rulemaking actions take place; the opportunity for public comment; and a formal analysis by regulators in crafting rules, which permits judicial review.[5]

The Biden administration should limit its use of guidance documents to effect significant policy changes, and the Department of Justice should retain the Trump administration’s policy of not relying on such guidance statements for enforcing the laws.

Statutes and regulations are often unclear or lack sufficient specificity to offer a clear guide to conduct for private parties. Businesses and individuals who hope to comply with laws and regulations are thus often uncertain about whether a particular action is or is not permitted. It is not inappropriate per se for executive-branch agencies to mitigate this problem by clarifying the administration’s position on a law or rule to promote private compliance. In recent years, however, administrations of both parties have turned to informal “guidance documents” that effectively announced significant policy shifts—although the term “guidance” appears nowhere in APA, the statute enacted by Congress to govern how agencies go about making rules.

Guidance documents, in short, are an end run around APA. Because the agency has eschewed formal regulation, individuals and businesses have no ability to challenge the agency’s determination in a court of what is or is not lawful until after the agency begins an enforcement proceeding. Large entities reliant on government regulators—such as pharmaceutical companies investing billions of dollars in drug development, under FDA supervision—have little choice but to comply with a guidance document. The Obama administration used guidance letters to press universities that depend on federal grant money and student-loan guarantees to change their policies surrounding sexual assault and gender identity.[6]

The Trump administration shifted away from this practice, taking the position that guidance documents were “non-binding both in law and in practice.”[7] In 2017, then–attorney general Jeff Sessions issued a memorandum clarifying that agencies “may use guidance and similar documents to educate regulated parties through plain-language restatements of existing legal requirements or provide non-binding advice on technical issues through examples or practices to guide the application or interpretation of statutes and regulations.” But they were “not [to] be used as a substitute for rulemaking and may not be used to impose new requirements on entities outside the Executive Branch.” The memo also stated that guidance documents do not “create binding standards by which the Department will determine compliance with existing regulatory or statutory requirements.”[8]

The Biden administration has already rescinded President Trump’s executive order on guidance documents.[9] But the Department of Justice (DOJ) should retain the broad parameters of the Sessions memorandum. The new administration has already reversed course on sex and gender-identity rules; if it wishes to execute this goal further, it should do so through formal administrative notice-and-comment rulemaking subject to judicial review. In exercising their constitutional advice and consent powers, senators should insist that nominees for offices in the Justice Department and other agencies with enforcement authority commit to following these rule-of-law principles.

The Biden administration should retain the Trump Justice Department’s policy of not allocating enforcement settlement dollars to third parties.

The taxing and spending power is the core of the congressional function. Necessarily, some revenues from private parties are generated through law enforcement—either through levying statutorily authorized fines or by agreeing to settlement terms with private parties to settle criminal or civil enforcement actions. Normally, such monies flow to the U.S. Treasury or as compensation to the putative victims of alleged misconduct. The Obama administration, however, used settlement negotiations as a lever to allocate billions of dollars to outside third-party groups that were not victims being compensated for injuries.[10]

Settlements between banks and the federal government totaled $46 billion between 2013 and 2016 alone. That the banks were under investigation is hardly surprising, given their role in the 2008–09 financial crisis. What was extraordinary was the remedy reached in the Obama administration’s negotiated settlements. The Department of Justice allocated almost half the “fines” imposed in these mammoth bank settlements to write down the principal owed by consumers on their mortgages and home equity loans; the settlements also pressured the banks to allocate large sums of money to various “community development” and housing-activist groups. Both actions constituted an aggressive end run around the U.S. Congress’s appropriations power.

The Trump administration stopped requiring or pressuring private defendants to allocate settlement dollars to third-party groups unless the funds were clearly intended to compensate victims or redress harms.[11] By executive order, President Biden has already placed the Trump administration’s formal rule on this issue under review.[12] The Biden administration should maintain the status quo.

The Securities and Exchange Commission, under the leadership of a new chairman to be appointed by President Biden, should not revisit new rules governing shareholder proposals and proxy advisory firms.

Unlike executive-branch agencies that are under presidential control, “independent” agencies are governed by commissioners or board members who cannot, absent misconduct, be removed from office by the president. Such agencies include the Federal Trade Commission, the Federal Reserve Board, the Federal Communications Commission, the National Labor Relations Board, and the Securities and Exchange Commission (SEC). As the Supreme Court has explained in upholding these independent agencies from constitutional challenge, the idea was “to create a body of experts . . . independent of executive authority except in its selection”—in part, because these entities are to have both “quasi-legislative” and “quasi-judicial” powers.[13]

Precisely because they have both legislative and judicial powers, Congress has structured these agencies to be governed by bipartisan boards with terms that overlap presidential administrations. As such, independent agencies should generally be hesitant to reverse recent rulemaking decisions merely because of a presidential election.

Among the many independent-agency rulemaking decisions finalized in recent years were the SEC’s 2020 changes to the rules governing shareholder proposals[14] and proxy advisory firms.[15] Although these rules were adopted in decisions split along partisan lines, the new rules address long-festering problems in the federal regulatory process governing the nation’s securities markets:

The new SEC rules governing proxy advisory firms and shareholder proposals will not go into effect until late 2021 and 2022, respectively, but investors and businesses are already adjusting to them. The Biden administration should appoint a new SEC chairman committed to retaining these rules, absent a congressional directive. U.S. senators reviewing President Biden’s nominee should ask questions on these issues as part of their exercise of advice and consent. 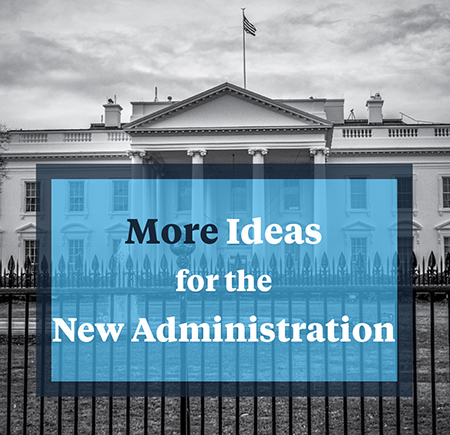 Testimony Before the U.S. House State and Local Government Committee