Why the D.C. Suburbs Need to Rethink This Light-Rail Project

Hillary Clinton and Donald Trump both say that more infrastructure spending is needed. But some infrastructure projects are wasteful and unnecessary. Take, for example, the Purple Line, a 16-mile light-rail project running east-west in the Maryland suburbs close to Washington D.C.

If the Purple Line were not built, Montgomery and Prince George’s counties would be able to make better use of the $330 million they have jointly pledged to the project.

U.S. District Judge Richard Leon has wisely issued a stay on the construction of the $2.5 billion project. He has called for a supplemental environmental impact study to perform another estimate of ridership figures, to see whether the estimated benefits of the project justify the certain costs.

The Washington Metro has seen a spate of costly and even deadly incidents over the past year, including fires and derailments. Hobbled by these disasters, the system is operating on a reduced schedule to carry out vital maintenance. Metro has also announced permanent earlier closing hours.

The Purple Line’s supporters are disappointed because Maryland was supposed to get $900 million in federal funds to build the new rail line. These funds are on hold because of Judge Leon’s decision. 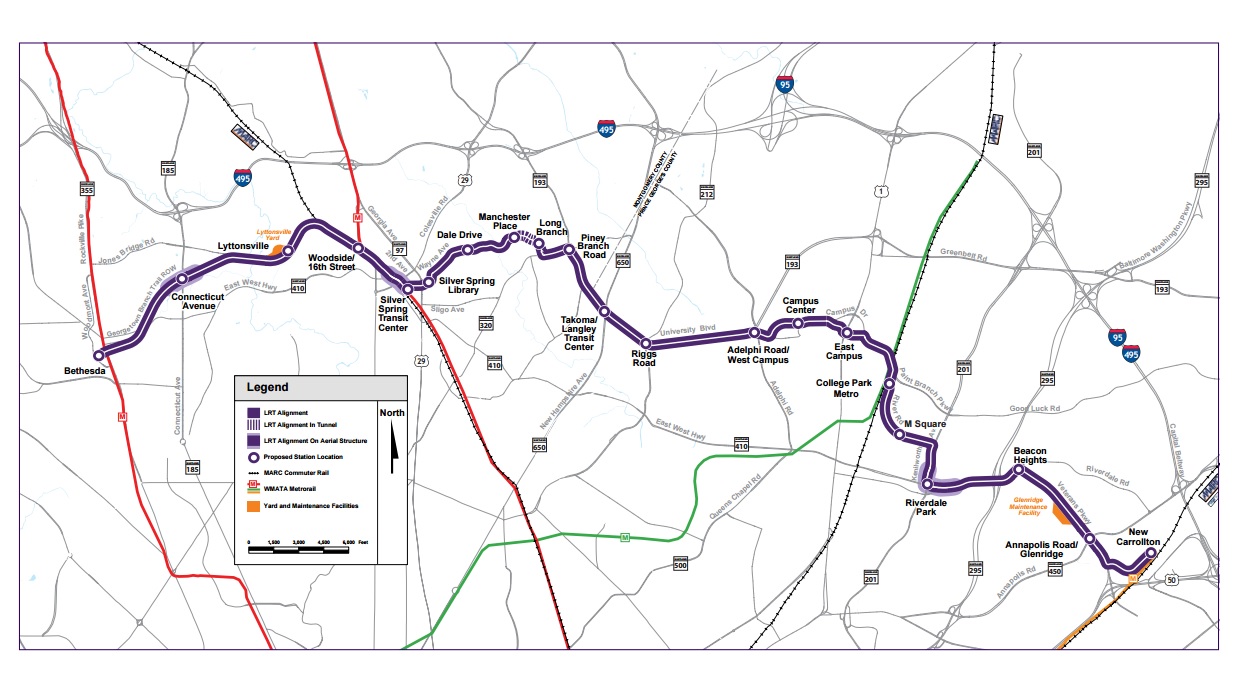 In addition to the $900 million in grants from the U.S. Department of Transportation, the Maryland Transit Administration (MTA) was planning to borrow an additional $732 million in federal loans and get $160 million from the State of Maryland. About $330 million would come from Montgomery and Prince George’s counties, the location of the Purple Line. Another $400 million would have to be raised from bonds or some other source.

If the Purple Line were not built, Montgomery and Prince George’s counties would be able to make better use of the $330 million they have jointly pledged to the project. They could educate 1,760 students from when they start kindergarten until they finish 12th grade; build 48 new elementary schools; cover all projected riders’ UberPOOL rides to downtown for two years (at $9.80 per ride); buy each projected rider a bike a year for 19 years (at $300/bike); or write a check for $183 for each of the 1.8 million residents of the two counties.

The lifetime cost of the project (over six years of construction and 30 years of service) is estimated at $5.6 billion. The project would never cover all its costs, and Maryland taxpayers would be liable for the cost overruns that always accompany large infrastructure projects.

The most recent ridership projections, from the Maryland Transit Administration, put daily ridership at 58,800 in the opening year of 2021. This is projected to rise to 74,000 by 2040. The Cato Institute’s Randal O’Toole thinks these numbers are wildly optimistic. For comparison, Metro had daily ridership of 713,000 in 2015. Just two Metro stations—Metro Center and Union Station—see about as many riders daily as the entire Purple Line, with 21 planned stations, is projected to carry.

The judge wanted these projections recalculated because 27% of riders of the Purple Line —which would run just south of the Beltway — are estimated to be transfers from Metro. But if Metro ridership is permanently lower due to shorter operating hours and maintenance problems, Purple Line ridership will be lower than projected.

A study by Transportation Economics and Management Systems (TEMS) purports to show that Maryland would gain by building the Purple Line, but the study isn’t based on actual consumer behavior, but on a “Maryland travel survey.”

After asking people about their demographic status, the survey asks consumers about a hypothetical scenario in which it is assumed that travel time is 50 minutes and the total cost of the trip is $12. People are asked five questions concerning hypothetical increases of cost in the trip and time savings associated with these higher costs.

People are asked whether they would be willing to pay more to save time.

These surveys are little more than opinions that cost people nothing to respond in any particular manner. Such opinion surveys appear to be part of the foundation of the Purple Line study.

If any of these fantastic numbers were remotely correct, or if only 10% of these values were correct, private investors would be bidding against one another to build the project privately. But no one is willing to build this project without massive subsidies from taxpayers.

In light of the costly unanticipated repairs to the existing multi-billion-dollar Washington Metro system, it is surprising that anyone is considering building yet another rail system in the Washington area. Judge Leon should be congratulated for calling for another analysis — and presidential candidates should fund infrastructure projects carefully.

Diana Furchtgott-Roth is a senior fellow and director of Economics21 at the Manhattan Institute. Follow him on Twitter here.