On February 20, 2018, the Trump administration issued a proposed rule that would roll back the Obama administration’s 2016 regulatory changes to short-term limited duration insurance (STLDI) plans. Combined with the repeal of the individual mandate, this deregulation is intended to make affordable health insurance available to millions of individuals who lack access to employer-sponsored insurance, public entitlements, or exchange subsidies. By allowing individuals the freedom to purchase more cost-effective plans available off the exchange, this approach seeks to unleash competition and better focus public subsidies on those who truly need them to access comprehensive coverage.

In its proposed rule, the Trump administration left open the question of whether plans would be required to guarantee renewability of STLDI plans to enrollees who became sick. This proposal has divided the insurance industry, with carriers such as United Healthcare and Aetna supportive of such additional consumer protections for those who develop what would count as preexisting conditions for the subsequent year’s enrollment, while groups such as America’s Health Insurance Plans and the Association for Community Affiliated Plans expressed opposition to regulations that may increase the attractiveness of plans that offer an alternative to enrollment in the exchange.

As the comment period drew to a close, several studies purporting to assess the merits of STLDI deregulation were released. Yet, instead of even-handedly enumerating the costs and benefits, two of the most prominent studies merely documented the costs of the deregulation on the exchange—leaving estimates of associated benefits entirely undisclosed.

The study by Oliver Wyman, for the Washington, DC, exchange, analyzed the impact of STLDI deregulation—firstly combined with repeal of the mandate penalty and secondly with the assumption that the mandate was unrepealed—but did not analyze the effect of deregulating STLDI with the mandate already zeroed-out, as will be the case. Wakely, commissioned by the Association for Community Health Plans, did publish such an analysis. An earlier study released by the Urban Institute explored various effects associated with the individual mandate’s repeal and the STLDI deregulation, both in combination and separately.

The findings of each of these studies, for the model that most closely identifies the long-term impact of deregulation of STLDI in isolation from the effects of the mandate can be seen in Exhibit 1. 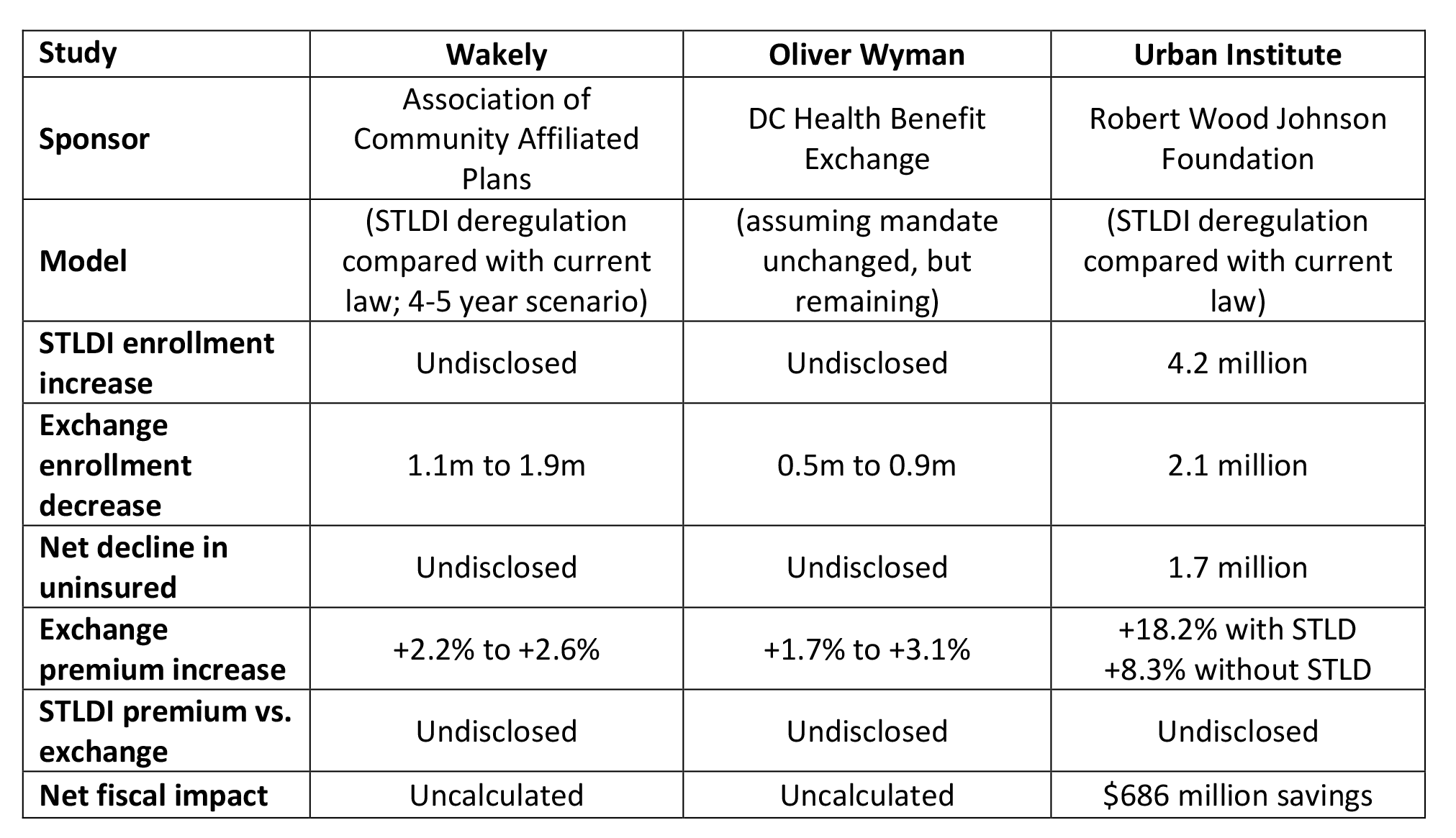 It is hard to see how a model of switching from the exchange to STLDI markets would be possible without estimating the premiums or enrollment likely to prevail among STLDI plans. Yet, neither the Wakely study commissioned by the Association for Community Affiliated Plans nor the Oliver Wyman study, commissioned by the Washington, DC, exchange, published such estimates. However, the Urban Institute did publish its estimate that STLDI deregulation, in the current post-mandate context, would increase STLDI enrollment by 4.2 million and reduce the overall number of uninsured Americans by 1.7 million.

The studies by Wakely and Oliver Wyman predict only the slightest impact of STLDI deregulation on unsubsidized exchange premiums. The Centers for Medicare and Medicaid Services (CMS) estimated that individuals switching from exchange to STLDI plans would see their premiums reduced by 68 percent, and none of the studies recently conducted has disputed this claim. These savings are many times greater than the 2 percent to 18 percent increases in premiums, which the range of studies estimate STLDI deregulation would impose on unsubsidized exchange enrollees.

Neither Oliver Wyman nor Wakely sought to quantify the impact on the federal budget resulting from STLDI deregulation, and this is clearly a complex matter as a result of offsetting effects of reduced exchange enrollment and automatically increased premium subsidies for a sicker risk pool. The Urban Institute’s estimate of $686 million in savings to federal taxpayers therefore, seems reasonable but is clearly subject to substantial uncertainty.

From this evidence, it nonetheless seems clear that by better focusing the Affordable Care Act’s subsidies on the subset of individuals who are uninsurable in an actuarially priced market, STLDI deregulation would increase overall insurance enrollment. Reductions in premiums for individuals able to enroll in STLDI plans are likely to greatly exceed the slight increase in costs for higher-income unsubsidized individuals remaining on the exchange. STLDI deregulation might even save taxpayers a little money too.

Why Taiwan Was the Only Nation That Responded Correctly to Coronavirus