Crime Is Up, but This Is No Crime Wave

The Major Cities Chiefs Association recently issued its crime figures for the first half of 2016, and some of the numbers are scary. In four out of five violent crime categories, including murder, the most trustworthy measure, this year is starting off worse than last -- and 2015 was more violent than the preceding year. Six out of the ten biggest American cities have seen double-digit increases in 2016; overall, crime is up 14.8 percent. The good news is that murder declined 6.4 percent in New York City and Houston saw a 51.4 percent drop.

The bottom line is that the criminal justice system is far from collapsing, and probably can withstand reforms without spurring a new crime wave.

Only a pollyanna would pooh-pooh the chiefs' negative figures and dismiss talk of a new crime rise. Clearly, crime is up, but there's a big difference between a crime spike or surge, which lasts a year or two, and a true crime boom or wave, which could run for decades. I define a crime wave as a period of sustained high crime, manifested by homicide victimization rates of eight or more per 100,000. Rates over the past few years have been hovering around 5 per 100,000. The last wave, which began at the end of the 1960s and ended in the middle 1990s, ran for two-and-a-half decades, as did the earlier twentieth-century crime boom, which dragged on from 1910 to 1936. 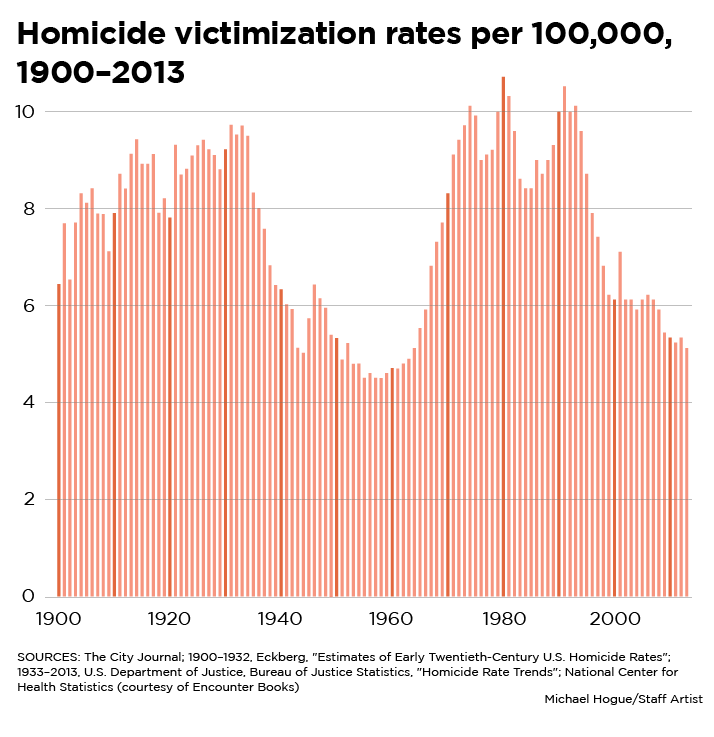 What we really want to know is whether we're headed for another crime wave, like the devastating crime tsunami of late memory. No one can be sure of the answer, of course, since the future is the greatest crime mystery of all, but if we look at the factors associated with previous booms and apply them to our current situation, we may get a better idea.

In the course of U.S. history, four factors have been especially significant in explaining crime booms.

1. The first is migrations within or to the United States of groups with so-called "honor cultures." Previous crime escalations were spurred by immigrations and migrations of groups that engage in a disproportionate use of violence to resolve interpersonal conflicts. Examples are the famine Irish of the mid-nineteenth century, southern Italian immigrants at the turn of the twentieth century, the Mexican migration of the 1920s, and the great black migrations of the 1920s and the post-World War II era. Each of these migrations increased crime at their destinations and raised total rates nationwide.

In the 1960s, for example, more than 800,000 blacks left the South for urban settings in the North and West. In the succeeding decade, another 1.5 million relocated -- the biggest decadal migration of African-Americans in American history. During a 20-year span, from 1976 through 1995, African Americans committed a majority of the criminal homicides in the United States -- 53.2 percent. This is quite extraordinary, given that during this period, blacks comprised around 12 percent of the U.S. population. But this was not a new. African-American homicide had been high at least since the late 1880s. In the 1920s, black homicide rates were, on average, seven times those of whites. From 1976 through 1995, they were eight times the white rate. Although racists attributed these rates to biological factors, the real explanation is the honor culture developed in Dixie and first found among Southern whites.

2. The second key factor is demographic change that creates an outsize youth population. Young people, especially males, are responsible for the overwhelming majority of violence. A sudden and major increase in the size of this population, such as occurred in the late 1960s, is a big risk factor for violent crime.

The increased youth population also produced "contagions," in which behaviors multiply rapidly as a consequence of the tendency of young people to copy one another. These behaviors may be socially positive (enrolling in college), neutral (getting tattoos), or negative (engaging in crime). If the behavior reaches a critical stage or "tipping point," it increases explosively. This is precisely what happened with crime in the late sixties.

3. Significant weaknesses in the machinery of law enforcement, especially in the destinations of the honor cultures, are another contributing factor. When police, courts, jails and prisons are unable to cope with crime, their failures serve as an incentive to increased lawbreaking. This occurred in the Wild West and in the rural South in the nineteenth century, in the big Northeast cities in the mid-nineteenth century (leading to the creation of urban police departments), and again in the late 1960s.

When the great crime tsunami engulfed the country, the criminal justice system buckled under the strain. Police couldn't cope with the sudden increase in offenders, courts couldn't conÂ­vict or imprison as many defendants as they had earlier, and people who were convicted spent less time behind bars. Police clearance rates (roughly, the ratio of arrests to reported crimes) tumbled in the late sixties. In 1950 and 1960, around four in ten reported robberies were cleared by police. That declined to under three in ten by 1970. And by 1980 and 1990, only one in four robberies was solved.

4. Finally, the presence of male gangs, especially those engaged in distribution of illegal substances, whether alcohol in the 1920s and 1930s or cocaine in the late 1980s and early 1990s, has also played a key role. Gangs normally fight one another, of course. But gang rivalries may also serve acquisitive motives, such as when they compete for territory to control the profit from distributing proscribed substances, as occurred with alcohol during Prohibition and cocaine in the late 1980s. These rivalries were more intense than the usual gang fights. They also were more lethal because of the use of firearms, which put even innocent bystanders at risk.

Three of the factors described above were present in the late 1960s crime wave. The fourth factor, drug gangs, was responsible for restarting the crime tsunami after it had begun to abate in the early eighties. 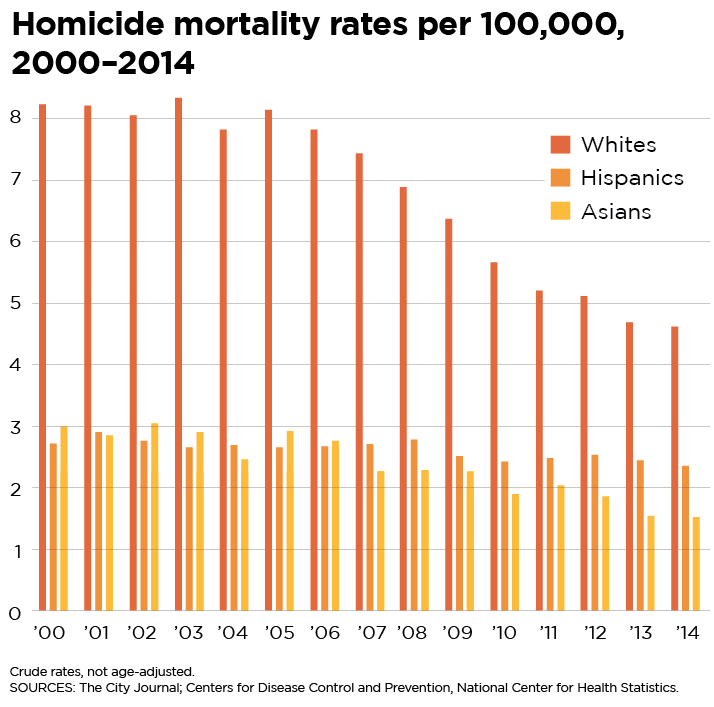 Do these four factors suggest that we're on the cusp of a new crime wave? Crime booms of the past have been cyclical and lasted about 25 years, which would mean that we're due for one to start sometime between 2015 and 2020. So perhaps the current surge is the start of a new boom. But the key factors point in a different direction.

Consider the effectiveness of the criminal justice system. In the name of fairness, racial equality and cost-saving, there have been aggressive efforts of late to limit the system. Efforts to deincarcerate have led to wholesale releases of 6,000 (and counting) drug traffickers held in federal prison under laws subsequently made less punitive. This despite a 2016 study by the United States Sentencing Commission demonstrating that half of released federal prisoners are rearrested, usually within 21 months of discharge. And in California, 20 percent of the state prison population was transferred to county jails, where the resulting overcrowding led to a 35 percent increase in outright releases. Whether this caused crime to rise in California remains a matter for debate, but 13 of the state's 15 biggest counties experienced violent-crime rate increases in 2015.

From a violent-crime standpoint, the issue is this: different groups have different propensities to use violence to resolve interpersonal conflicts, and, therefore, different violent-crime rates.

Despite the retrenchments, the criminal justice system, which was reconstituted starting in the 1980s, has continued to perform well. Police clearance rates deteriorated dramatically in the crime-tsunami years, but then leveled off. Since 2000, murder clearances have averaged 63 percent, with no sign of further decline. As for incarceration rates, they too have diminished since 2008, but, as the anti-incarceration lobby never tires of reminding us, they remain far higher than in other countries with democratic governments. For instance, while imprisonment rates for the United Kingdom were 149 per 100,000 in 2014, United States rates were 471.

The bottom line is that the criminal justice system is far from collapsing, and probably can withstand reforms (read: "downsizing") without spurring a new crime wave.

The gang picture is more hopeful than in the past as well. To be sure, gangs remain responsible for a big share of urban violence. In New York, outgoing police commissioner William Bratton recently estimated that nearly half the city's shootings were attributable to gangs. The good news: petty quarrels, not substance distribution, are their primary motivation. The present-day drug problem involves illegal opiates, like heroin, and prescription drugs, like Oxycontin and Fentanyl. These opiates are highly addictive, but the biggest cause of death is self-administered overdosing, not gang killings.

Despite the political noise over the issue, immigration trends are also encouraging. Today, we have a massive immigrant population, almost as great as in the early 20th century. In 2014, 42.4 million immigrants resided in the U.S. -- 13.3 percent of the inhabitants -- and if one counts U.S.-born children, immigrants and their progeny comprise 81 million people, or 26 percent of the total population.

From a violent-crime standpoint, the issue is this: different groups have different propensities to use violence to resolve interpersonal conflicts, and, therefore, different violent-crime rates. Generally, Asian populations have much lower homicide rates than Hispanic populations. Hispanic homicide-victimization rates were 298 percent higher than Asian rates in 2014. And, immigration projections for 2025 indicate increased proportions of Asians (from 26 to 29 percent) entering the United States and smaller proportions of Hispanics (from 47 to 43 percent).

As for domestic migrations, African-Americans have been migrating out of northern, midwestern and western cities since the 1970s in a reverse Great Migration. For example, from 2005 to 2010, nearly 250,000 blacks left the northeast, and nationwide, approximately 325,000 went south. Moreover, since the civil rights movement, blacks have made significant social gains, and middle-class populations don't engage in much violence.

Finally, the demographic picture is highly favorable to low rates of crime. Census projections indicate an aging population, and older people do much less violence than younger. The young male portion of the population (ages 18-24) is expected to decline from 4.98 to 4.38 percent of the U.S. population during the next 15 years, whereas the 65-and-older cohort will increase from less than 15 percent to well over 20 percent of the total.

We have to face occasional crime spikes or surges, such as we are now experiencing, but a long-term, sustained crime rise, on the order of those from previous eras, seems unlikely. No one should be sanguine about these crime surges, of course, as they reflect real increases in human loss and suffering. Still, genuine crime waves --as anyone who lived through the last one can attest -- are far worse.