Yesterday, the nonpartisan Congressional Budget Office released its annual ten-year Budget and Economic Outlook. The document contains the CBO’s updated estimates for economic growth, employment, and the nation’s fiscal health. The most notable change was to enrollment in Obamacare’s health insurance exchanges. The CBO, bowing to reality, slashed their 2016 estimates of exchange enrollment from 21 million to 13 million. Furthermore, the CBO implied that it expects exchange enrollment to peak at 16 million: a far cry from the 24 million it predicted last March.

Here’s what Keith Hall, the new CBO director, had to say in the first Budget and Economic Outlook published under his tenure:

"On the basis of information about 2015 enrollment and information available as of the end of December 2015 on 2016 enrollment, CBO and the staff of the Joint Committee on Taxation (JCT) estimate that about 11 million people per month, on average, will receive such subsidies in calendar year 2016. Additionally, the agencies project that about 2 million people who are not eligible for subsidies will purchase coverage through an exchange, bringing the total number of people enrolled in coverage through exchanges in any given month to 13 million, on average. (The enrollment projections and other factors underlying the estimates of exchange subsidies provided in this report for years after 2016 have not been updated since March 2015, except to incorporate the effects of enacted legislation.)"

The new CBO numbers come three months after the White House threw in the towel on meaningful exchange enrollment growth, predicting that the exchanges would stall at around 10.4 million enrollees in 2016: an increase of only 1.3 million from the previous year.

In a footnote, CBO added that it would update its long-term enrollment numbers in March. But based on the latest report, and several others of recent vintage, we can discern that CBO has not only downgraded its 2016 enrollment projections but also its estimates for peak Obamacare exchange enrollment.

Getting a good sense of where CBO is headed requires several sets of numbers. First, the amount that the CBO expects taxpayers to spend subsidizing premiums, deductibles, and co-pays on the Obamacare exchanges. Second, the CBO’s projection of average annual per-person subsidies on the exchanges. Third, the number of people who CBO expects will enroll on the exchanges without subsidies.

We can calculate the first set of numbers by taking the “health insurance subsidies and related spending” line item from Table 3–2 in the Budget and Economic Outlook: 2016 to 2026 report, then subtracting outlays for “payments for risk adjustment and reinsurance” from Table 4 in the CBO’s June 2015 publication, Budgetary and Economic Effects of Repealing the Affordable Care Act.

The second set of numbers comes, most recently, from the March 2015 CBO baseline. 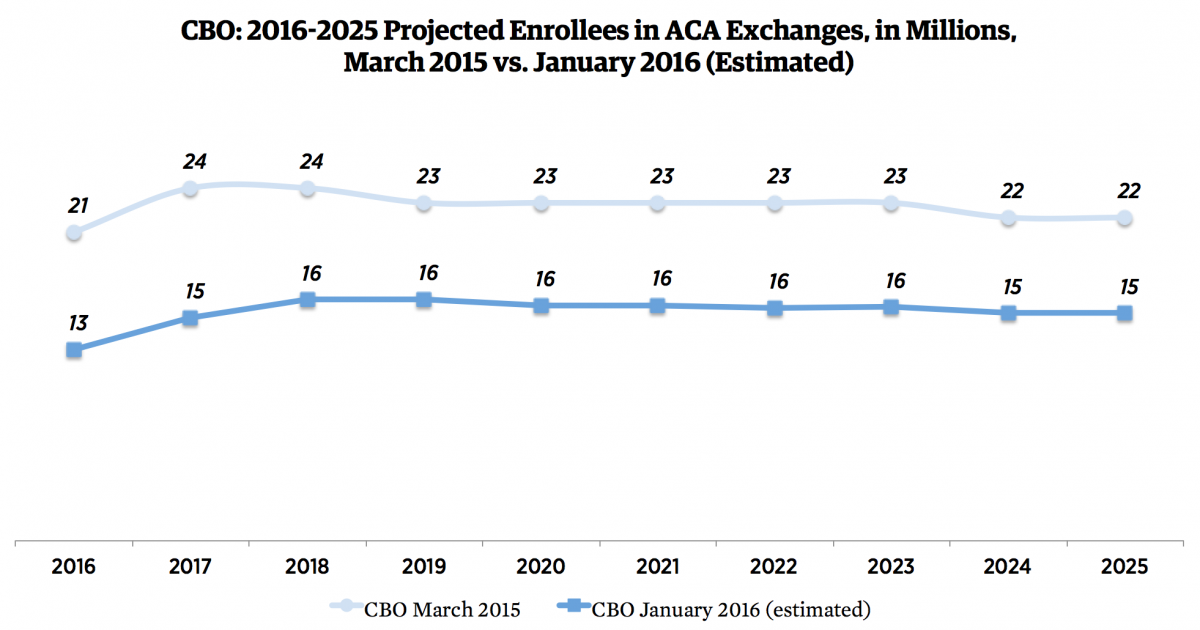 It’s the latter category—the subsidized individuals—that really matters, because those are the individuals who are gaining direct financial assistance from the law. Most people buying insurance without subsidies are the same people who were buying insurance in the old, pre-Obamacare market.

For all of the taxes and regulations and spending contained in Obamacare, what’s remarkable about the law is that it has only reduced the percentage of U.S. residents without health insurance by 2.7 percentage points between 2008 and 2014. The total U.S. population in 2014 was 318.3 million, meaning that the total impact of Obamacare on the uninsured population, on a 2014-adjusted basis, was around 8.6 million.

Remember that only a fraction of that 2.7 percent are U.S. citizens who can vote. “It has been reported that only a third of the uninsured are even registered to vote,” complained New York Sen. Chuck Schumer (D.) in 2014. Obamacare, said Schumer, “made no political sense.” 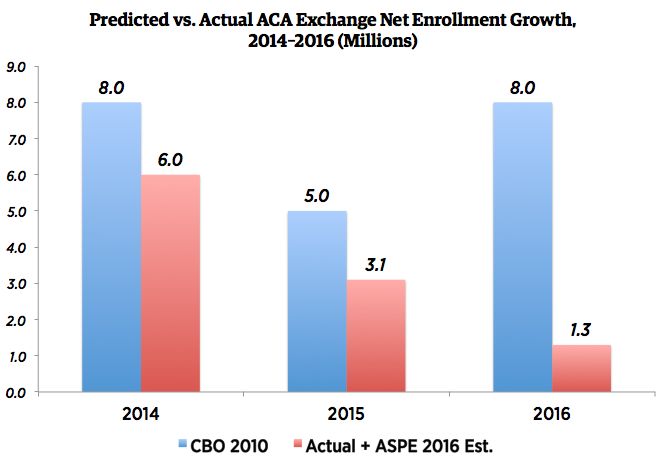 Also note that 8.6 million is a far lower figure than the number of people currently enrolled in Obamacare-sponsored products. Elsewhere in the latest Budget and Economic Outlook, CBO stated that “average monthly enrollment of newly eligible Medicaid beneficiaries was…9.6 million [in 2015] compared with 6.1 million in 2014.” Adding that to exchange enrollment gets you to roughly 24 million people on Obamacare-sponsored products.

The Obama administration often boasts about that much larger figure, claiming that 24 million people have been helped by Obamacare. But the government’s official estimates are that it’s under 9 million. Of which only a fraction can vote in the 2016 election.

(DISCLOSURE: I am advising Sen. Marco Rubio, but the opinions in this post are mine, and do not necessarily correspond to those of Sen. Rubio.)

This piece originally appeared in Forbes.com's "The Apothecary"

See All
The ACA’s shortcomings should not discourage Congress from striving to achieve... affordable health coverage for every American
testimony