Capital Gains: A Tax on the Middle Class

In contrast, middle-class families who have either invested in securities or built small businesses typically must sell a large portion of their investment at the peak of their savings, in order to pay for a large expense like retirement, a child’s education, or the purchase of a home. At that time, these investors have no choice but to pay tax on their capital gains.

Another hypothetical example: A married couple, a policeman and a nurse, have seen their combined annual income go up from $40,000 at age 21 to $90,000 at age 46. During the past 14 years, during which their income averaged $72,425, they have invested 8 percent of their savings, or $6,000 per year, in an investment fund indexed to the Standard & Poor’s 500; the value of their portfolio now stands at $96,600. This year their oldest child enters a university, so they liquidate 15 percent of their portfolio, giving them a taxable capital gain of $13,455. Again, they must pay the full 28 percent tax rate on this gain.

These cases illustrate two important points about the capital gains tax. First, studies that purport to show that most capital gains taxes are paid by wealthy individuals reflect a fundamental error: They treat individuals as “high-income” because of a one-time increase in earnings the year they realize capital gains. In both our hypothetical cases, the individuals probably earn over $100,000 in the year in question, but their normal incomes put them well within the middle class.

Second, the capital gains tax is a tax on nominal earnings—it is not adjusted for inflation. Much of the increase in the value of a taxi medallion, for example, reflects a decade’s inflation, not an increase in the real value of the medallion. To take a more extreme example, consider an investor who bought a small business for $100,000 in 1962 and sold it for $300,000 in 1995. In real terms, the value of his business is unchanged: $300,000 in 1995 dollars is worth about the same as $100,000 in 1962 dollars. Yet the businessman would pay $56,000 in capital gains taxes, leaving him with a negative real after-tax return on his investment.

The capital gains tax is applied to the net profit on investments sold in a given year. Therefore, an investor who sells profitable securities may offset his gains by also selling securities that have lost money. The owner of a small business or the small investor in a conservative mutual fund will not have such offsetting losses. But a wealthy investor is more likely to have access to sophisticated advice on how to manage his portfolio to avoid taxes.

Moreover, the wealthy investor has natural advantages in avoiding taxes. Because he has a larger portfolio, he will have to liquidate a much smaller percentage of it in a typical year than a middle-class investor would. Further, because he has more capital to begin with, he will have more flexibility to buy high-risk securities. That means more of the individual securities he buys will lose money—even though the overall return on his portfolio will be just as high as, or higher than, that of a middle-class investor.

When the wealthy investor liquidates a portion of his portfolio, he will be able to sell securities that have declined in value along with some that have been profitable, using the losses from the former to offset the gains from the latter and thereby reducing his tax liability. Yet even though he avoids paying capital gains taxes, the overall return on his portfolio will still be quite high, because his profitable investments have a high rate of return.

1) A small business owner who must sell his firm, which represents his entire net worth;

2) A middle-class investor who must liquidate 40 percent of his portfolio each year; and

3) A wealthy investor who must liquidate 20 percent of his portfolio each year.

The first investor’s case is simple: as in the example above, he pays 28 percent of his nominal gain.

The second investor diversifies his portfolio, buying 20 stocks, which, over 20 years, have the characteristics of the Standard & Poor’s index: average annual “volatility” (a measure of the fluctuation in the price of stocks) of 16 percent and average annual price appreciation of 15 percent.

Pursuing this optimal tax-driven investment strategy, the second investor seeks to offset the tax liability of his gains by selling stocks that have lost money. Our computer simulation shows that this investor is likely to pay an effective capital gains tax of 20 percent on the nominal gains from the profitable stocks he sells. His total after-tax profit is 12 percent. (An actual middle-class investor is unlikely to pursue an optimal tax-driven investment strategy. More likely, he would purchase shares of a mutual fund and pay the full tax on his profit.)

The wealthy investor also pursues an optimal tax-driven investment strategy, but he is at an advantage. Because his wealth is greater and his cash needs smaller relative to his total investments, he can invest in high-risk securities—those with high volatility. Because his portfolio is larger, the wealthy investor is likely to have the motivation and the professional support to adopt an optimal tax-driven strategy. In our simulation, he purchases 20 stocks with average volatility of 25 percent (as opposed to 16 percent for the S&P 500) and average annual price appreciation of 15 percent (identical to the S&P 500).

In this scenario, we found, the investor is likely to have sufficient tax losses every year to offset all the capital gains he needs to realize—with exactly the same pre-tax return on the investment in his portfolio. After taxes, he earns a total annual profit of 15 percent.

To sum up, in our simulation, the small businessman pays the full 28 percent tax on his profits; the middle-class investor pays 20 percent; and the wealthy investor pays zero.

In practical terms, it is likely that a wealthy investor would buy high-volatility stocks that also have a higher rate of return than the S&P 500. In this case, he would have a relatively higher proportion of gainers to losers, and may not have enough capital losses to offset all his gains. To test what would happen under such circumstances, we ran the model again, this time assuming the wealthy investor bought stocks with an average volatility of 25 percent and an average return of 20 percent. In this case, the effective tax rate is about 17 percent—still lower than that of the middle-class investor. His after-tax profit is 17 percent—higher than the S&P average.

The conclusion is startling: To the extent that wealthy investors must pay capital gains taxes at all, it is because they have earned pre-tax returns superior to those generated by the broad stock indices such as the S&P 500.

David Goldman is a Managing Director of Bear Stearns and Co. Inc. in the Financial Analytics Structured Transactions Group and is responsible for Fixed Income Strategy.Â  He writes a monthly column for Forbes magazine, and has contributed to The Wall Street Journal, The Journal of Applied Corporate Finance, The Public Interest, The Washington Times and other publications.

Evan Kalimtgis is a Vice President in the Financial Analytics Structured Transactions Group at Bear Stearns and Co. Inc. He is completing a Ph.D. in Finance at Columbia University. 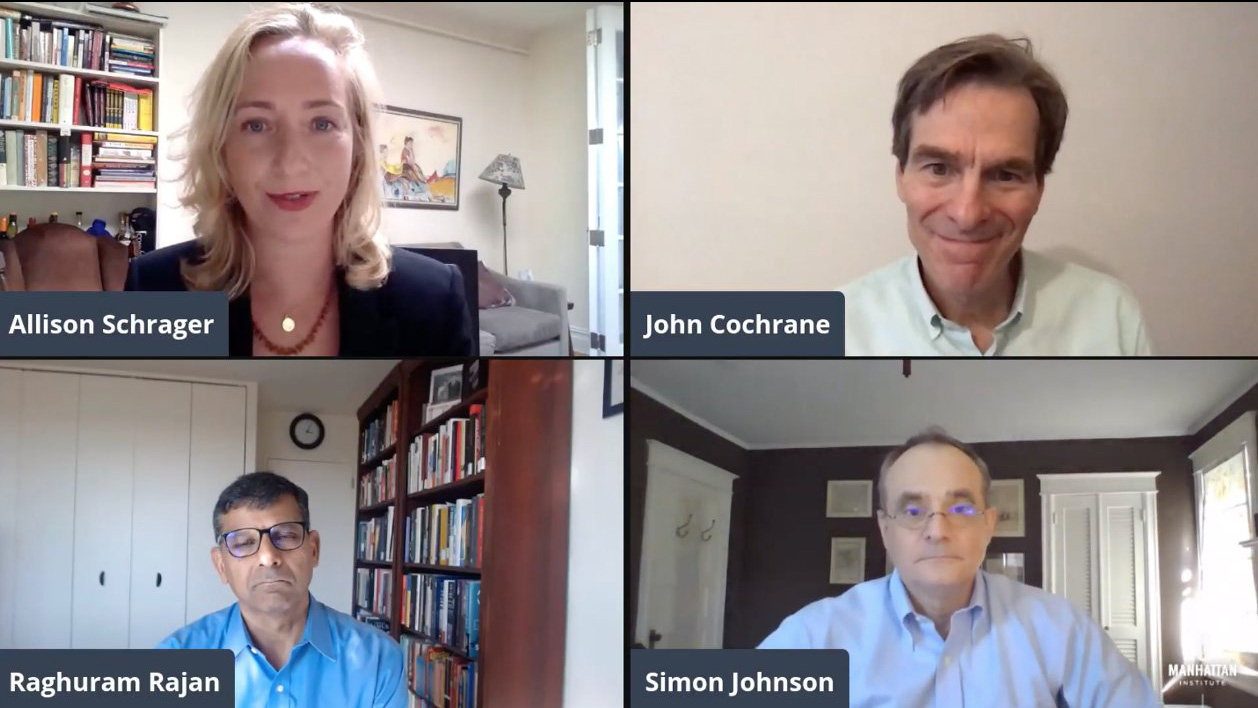