The Lies Told by the Black Lives Matter Movement

The Black Lives Matter movement has been feted repeatedly at the White House and honored at the Democratic National Convention. Hillary Clinton has incorporated its claims about racist, homicidal cops into her presidential campaign pitch.

The idea that the U.S. is experiencing an epidemic of racially driven police shootings is false, and dangerously so...

The recent assassinations of police officers in the name of Black Lives Matter ideology have not slowed down the anti-cop demonstrations or diminished the virulent hatred directed at cops during those protests.

And more recently, San Francisco 49ers quarterback Colin Kaepernick refused to stand for the National Anthem to protest the country's treatment of black people, while pop singer Beyonce has made the movement the focal point of her performances.

Yet the Black Lives Matter movement is based on a lie, and not just the lie that a pacific Michael Brown was gunned down in cold blood by Ferguson, Mo., police officer Darren Wilson in August 2014.

The idea that the U.S. is experiencing an epidemic of racially driven police shootings is also false, and dangerously so. Several studies released this year show that police officers are less likely to shoot blacks than whites.

But just as Michael Brown continues to be venerated as a martyr to police brutality despite the Justice Department's evisceration of the "hands up, don't shoot" narrative, the media, activists and many politicians continue to traffic in demonstrable untruths about police shootings, race and crime.

The facts are these: Last year, the police shot 990 people, the vast majority armed or violently resisting arrest, according to the Washington Post's database of fatal police shootings. Whites made up 49.9 percent of those victims, blacks, 26 percent. That proportion of black victims is lower than what the black violent crime rate would predict. 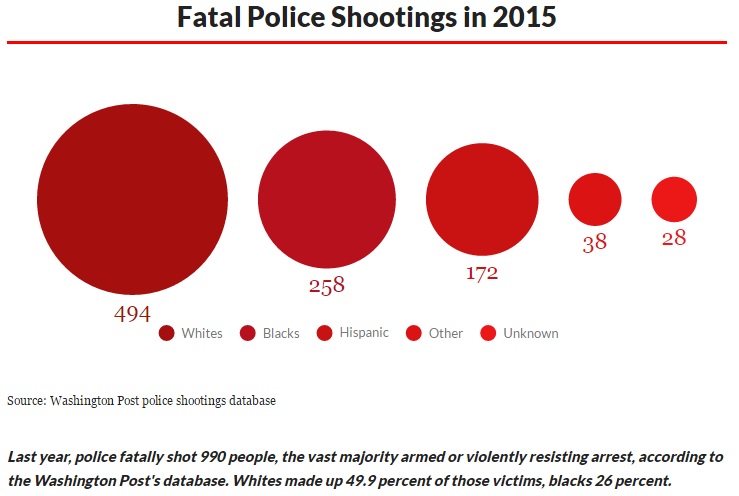 Police critics have never answered the question of what they think non-biased policing data should look like, in light of the vast differences in rates of criminal offending.

Such racially skewed crime ratios are repeated in virtually all American metropolises. They mean that when officers are called to the scene of a drive-by shooting or an armed robbery, they will overwhelmingly be summoned to minority neighborhoods, looking for minority suspects in the aid of minority victims.

That disparity is driven by the greatly elevated rates of criminal victimization in the black community. More blacks die each year from homicide, more than 6,000, than homicide victims of all other races combined. Their killers are not the police, and not whites, but other blacks. In Chicago this year through Aug. 30, 2,870 people, mostly black, were shot.

If you believed the Black Lives Matter narrative, you would assume that the assailants of those black victims were in large part cops. In fact, the police shot 17 people, most of whom were threatening lethal force, accounting for 0.6 percent of the total.

Gun-related murders of officers are up 52 percent this year through Aug. 30 compared to last year.

Police critics have never answered the question of what they think non-biased policing data should look like, in light of the vast differences in rates of criminal offending. Blacks commit homicide at eight times the rate of whites and Hispanics combined. Black males between the ages of 14-17 commit gun homicide at nearly 10 times the rate of white and Hispanic male teens combined.

Should police stops, arrests and those rare instances of police shootings nevertheless mirror population ratios, rather than crime ratios? President Obama apparently thinks so. Just hours before the assassination of five officers in Dallas on July 7, he criticized the police for arresting blacks at twice the rate of whites. The president remained assiduously silent about crime rates.

A recent study by an economist at Maryland's Pacific Institute for Research and Evaluation found that race does not affect a civilian's risk of injury or death following an arrest or a police stop; blacks and whites face an equal chance of getting injured or killed by a police officer.

If blacks are killed by officers at a rate higher than their population numbers, economist Ted Miller told The Guardian, "it's the excessive arrest of minorities that's the problem. We need to bring down the numbers of [blacks] being arrested in the first place." (Unless blacks themselves bring their crime rate down, however, the only way to lower their arrest rate is to eliminate criminal statutes or to ask the police to ignore crime.)

Miller's study, published in Injury Prevention, was a relative outlier in finding that blacks face the same risk as whites of having potentially lethal force used against them. Other research this year shows that blacks are actually shot less than whites by the police.

Lead investigator Lois James, from Washington State University, hypothesized that officers were second-guessing themselves when confronting black suspects, due to their awareness of the potential negative repercussions of shooting a black civilian.

In a data set comprising officer shootings from Dallas, Austin, Houston, Los Angeles and six Florida counties, he found that officers were 47 percent less likely to discharge their weapon without first being attacked if the suspect was black than if the suspect was white, and that black and white victims of police shootings were equally likely to have been armed. Overall, Fryer found no evidence of racial discrimination in shootings.

And an analysis of police use of force by the Center for Policing Equity concluded, consistent with James and Fryer, that whites were disadvantaged compared to blacks when it comes to lethal force. Officers' use of lethal force following an arrest for a violent felony was over twice the rate for white arrestees than for black arrestees.

Why is this happening?

Why, then, the widespread perception that there is a law enforcement war on blacks? Because the mainstream media relentlessly focuses on a handful of police shootings of blacks and ignores police shootings of whites, as well as the crime that brings officers into disproportionate contact with black suspects.

Among the nearly 500 white victims of fatal police shootings last year was a 50-year-old suspect in a domestic assault call in Tuscaloosa, Ala., who ran at the shooting officer with a spoon; a 28-year-old driver in Des Moines, Iowa, who led police on a chase, then got out of his car and walked quickly toward the shooting officer; and a 21-year-old suspect in a grocery store robbery in Akron, Ohio, who had escaped on a bike and did not remove his hand from his waistband when ordered to do so.

While the nation was focused on the non-epidemic of racist killings by police throughout 2015, the routine drive-by shootings in urban areas were taking their usual toll, including on children, to little national notice.

Had any of these victims been black, police critics would have conferred on them instant notoriety; instead, they are unknown. And had the media focused exclusively on those and other police killings of whites, the impression would have been created that there is an epidemic of officer-involved shootings of whites.

In fact, fatal police shootings are rare, no matter the race of the victim. The police have about 385 million contacts with citizens a year; in 2014, they made more than 11 million arrests. According to data collected by the FBI from only two-thirds of police departments, officers in those departments were assaulted more than 48,000 times.

But the Black Lives Matter narrative has nevertheless had an enormous effect on policing and public safety, despite its mendacity. Murders of officers are up 62 percent this year through Aug. 7 compared to last year. The cop assassinations are only a more extreme version of the Black Lives Matter-inspired hatred that officers working in urban areas encounter on a daily basis.

Officers are routinely surrounded by hostile, jeering crowds when they try to conduct a street investigation or make an arrest. Resistance to arrest is up, officers report. Cops have been repeatedly told by Obama and the media that pedestrian stops and public order enforcement (known as "broken windows policing") are racist. In consequence, they are doing less of those discretionary activities in high-crime minority communities.

The result? Violent crime is rising in cities with large black populations. Homicides in 2015 rose anywhere from 54 percent in Washington, D.C., to 90 percent in Cleveland. In the nation's 56 largest cities, homicides rose 17 percent in 2015, a nearly unprecedented one-year spike. In the first half of 2016, homicides in 51 large cities were up another 15 percent compared to the same period last year.

The victims of this politically driven de-policing, what I have called the "Ferguson effect," are overwhelmingly black. While the nation was focused on the non-epidemic of racist killings by police throughout 2015, the routine drive-by shootings in urban areas were taking their usual toll, including on children, to little national notice.

In Cleveland, three children ages five and younger were killed in September 2015 alone. Five children were shot in Cleveland over the 2015 July 4 weekend. A seven-year-old boy was killed in Chicago that same weekend by a bullet intended for his father. In November, a nine-year-old in Chicago was lured into an alley and killed by his father's gang enemies; the father of the murdered nine-year-old refused to cooperate with the police in identifying his son's killers.

The carnage has continued this year. In Chicago alone, at least 15 children under the age of 12 have been shot in the first seven months of 2016, including a three-year-old boy who is now paralyzed for life following a Father's Day drive-by shooting. While the world knows who the thug Michael Brown is, few people outside these children's immediate communities know their names. Black Lives Matter activists have organized no protests to stigmatize their assailants.

To be sure, every police shooting of an innocent, unarmed civilian is a stomach-churning tragedy. There have been some bad police shootings over the last two years, many the result of faulty tactics that needlessly exposed officers to potentially lethal risk. Officers yearn for more hands-on tactical training, and some pay for their own training when their cash-strapped departments are unable to provide it.

But in a grotesque waste of resources, the Obama administration and Hillary Clinton are pushing tactically useless "implicit bias" training on departments, based on the false conceit that the nation's officers are in the throes of endemic racism.

For the past two decades, the country has been talking about phantom police racism in order to avoid talking about a more uncomfortable truth: black crime. But in the era of data-driven law enforcement, policing is simply a function of crime. The best way to lower police-civilian contacts in inner-city neighborhoods would be to radically lower the crime rate there.

For that to happen, more boys need to be raised by their fathers. Until family structure is strengthened, however, the best way to save black lives is lawful, proactive policing — not a duplicitous war on cops.

This piece originally appeared in the Washington Examiner

The War on Cops