How to Increase Public Safety on NYC Subways: Correct the Balance Among Lower Ridership, Higher Crime, and Proactive Law Enforcement

After more than a year of full and partial economic shutdowns during the Covid-19 pandemic, violent subway crime has become a serious concern for New Yorkers who rely on public transit. As the Metropolitan Transportation Authority (MTA) reported in April 2021, just 26% of riders feel safe from crime and harassment on the trains, down from 65% in the final quarter of 2019, pre-pandemic. In stations, only 34% of riders feel safe, down from 70%.[1]

Although the city is reopening for business, subway ridership is barely 2.4 million passengers per day as of mid-June 2021, 42% of what it was before the pandemic. Fear of crime also deters people from riding the trains, thereby harming the city economy, contributing to traffic congestion on the streets, and straining the MTA’s finances.

Yet New York knows how to keep its subways secure. In the three decades leading up to the pandemic, subways were the safest that they had been in modern history. This was due to two factors: high ridership, with potential criminals deterred by a crowd; and predictable, consistent, criminal and civil law enforcement to keep potentially violent criminals out of the subway system. Even before the pandemic, the NYPD was easing up on law enforcement—but large crowds continued to keep subway crime low.

Since the pandemic hit New York City in March 2020, the administration of Mayor Bill de Blasio has consistently denied that subway crime has risen. In early May 2021, for example, the mayor told radio host Brian Lehrer that the MTA leadership, which had asked for more police officers, was “fearmongering … people constantly saying something isn’t safe when it is.”[2] Later that month, NYPD transit-police chief Kathleen O’Reilly told an MTA board meeting that “crime remains down year to date … a decrease of 46.8%.”[3]

With ridership now indefinitely low, the NYPD must provide a consistently elevated level of predictable civil and criminal law enforcement to deter violent activity, something that it is not yet doing.

A Short History of Subway Safety

The current level of violent crime on the subways in no way resembles that of the 1980s and early 1990s. In 1990, for instance, 26 people lost their lives to murder, a record high. By the 2000s, this number had consistently fallen to one or two murders annually. With subway system felonies having fallen from 18,324 in 1990 to 2,469 in 2019, the risk of crime victimization fell from 19 felonies per million rides to fewer than 1.5 felonies per million rides, a level not seen since the late 1960s.

This policy saw quick and lasting results. In 1991, felonies fell by 15%, to 15,572, and continued to fall over most of the following three decades, to fewer than 2,500 felonies per year (Figure 1).[4] As late as 2015, with crime near record lows, the NYPD regularly confiscated dozens of handguns and hundreds of knives annually from fare-beaters or people committing other small infractions, such as walking between subway cars.[5] 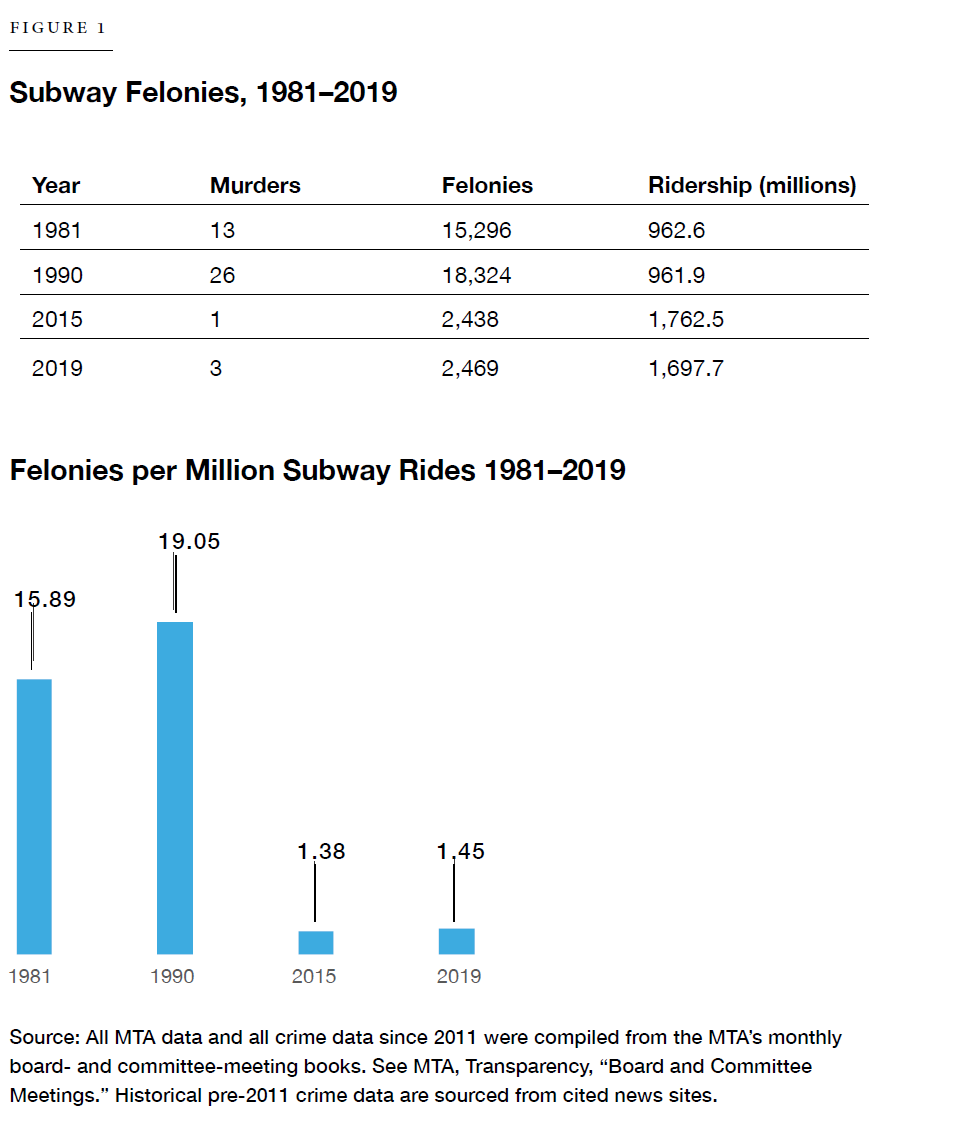 Second, record-high ridership was itself a deterrent to crime. Between the early 1980s and 2015, subway ridership doubled, approaching 2 billion rides per year. Fewer people attempted to commit a robbery or rape amid the ensuing large crowds. This virtuous circle bears out Bratton’s “peace dividend” thesis, which he set out in 2015 as de Blasio’s NYPD police commissioner: an enhanced perception of public safety encouraged more people to ride the trains, which, in turn, further enhanced public safety, allowing police to lessen, though not cease, their enforcement measures.[6]

Most law enforcement on the subways involves civil offenses, not criminal behavior. In 2019, for example, police gave out 73,065 summonses referring alleged violators to the MTA’s “transit adjudication bureau” to either dispute or pay the $100 fine for fare evasion. By contrast, police made 10,528 arrests, including 3,113 arrests for fare evasion, usually for chronic fare evaders who had not responded to the previous deterrents of a fine. A first-time offender breaking an MTA rule—such as fare evasion, playing a loud radio, walking between cars, or urinating on subway property—almost certainly faces a fine, not an arrest.[7] Recidivists, people without identification, people who resist receiving a summons, and people found carrying weapons or with outstanding warrants face arrest, as do people caught in any kind of alleged criminal activity in progress, such as sexual assault (groping) or grand larceny (pickpocketing).

The pandemic year—2020—saw the most abrupt acceleration in serious subway crime per capita in history. As ridership fell to record lows, felonies per capita nearly doubled, to nearly three per million rides (Figure 2). 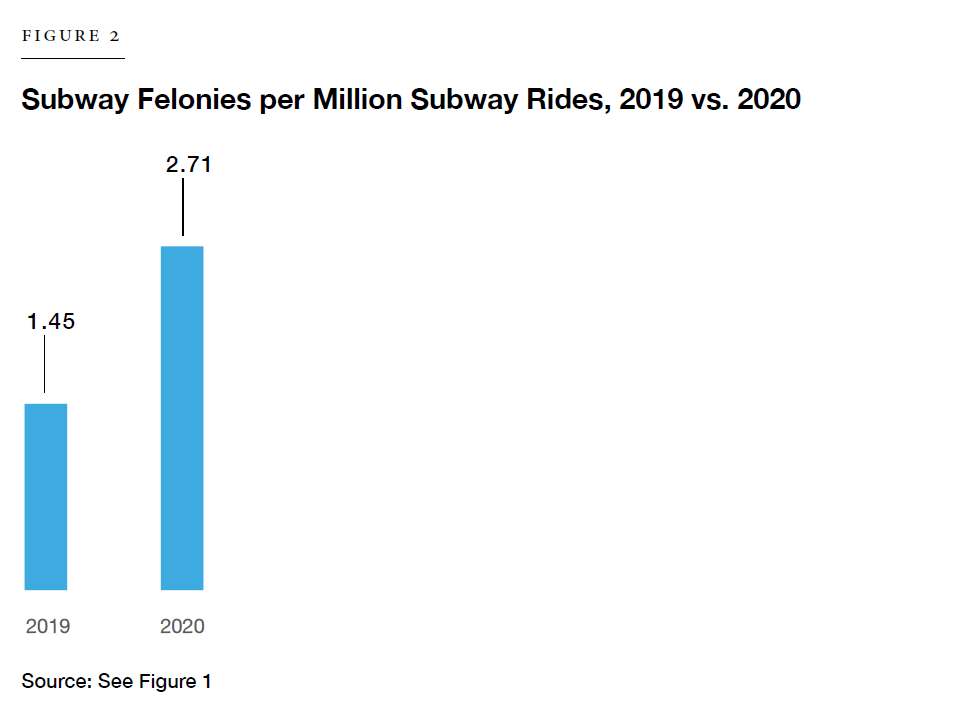 The most disturbing transit-crime development was violent crimes against people, as opposed to felonies against property (Figure 3). Violent felonies—murder, rape, robbery, and assault— have increased disproportionately to nonviolent property crimes, larceny, and burglary (the last usually the theft of the MTA’s own property, such as workers’ tools). In 2019, of the subway system’s 2,469 felonies, 1,552, or nearly two-thirds, were nonviolent. The vast majority of these nonviolent felony crimes—1,546—were larcenies or the theft of property without violence, generally someone stealing an unattended phone or wallet. 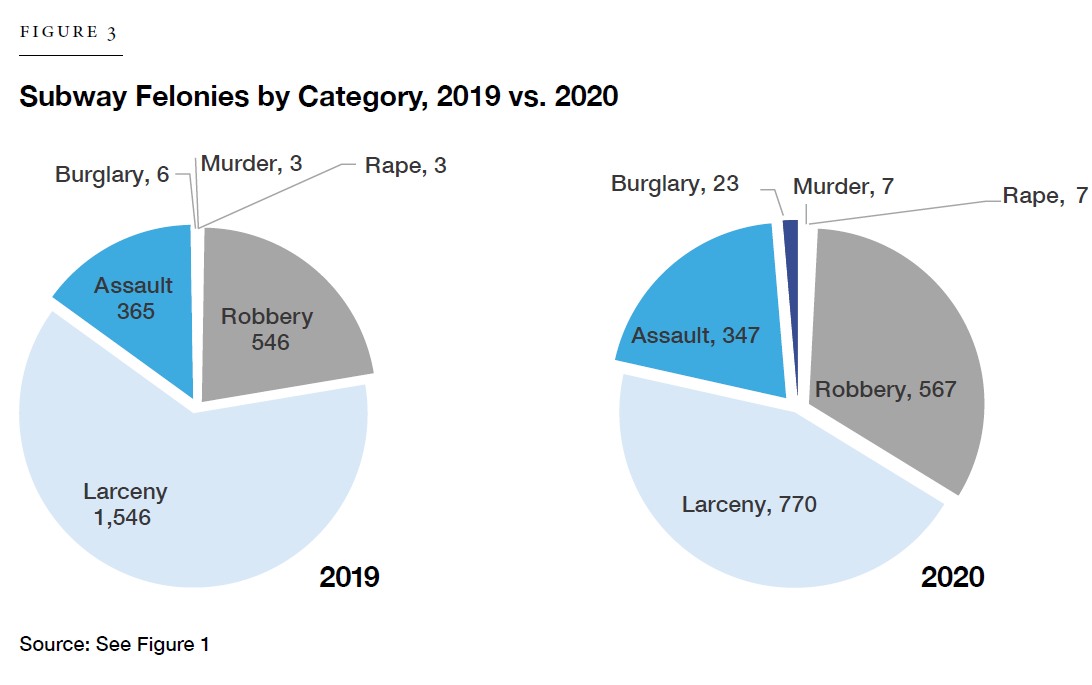 In 2020, overall felonies fell by 30.3%. But compared with the average ridership drop of 62.3% throughout the year, this “drop” in crime represented a per-capita increase in all felony crimes. Moreover, the drop in felony crime was entirely due to a drop in nonviolent felonies. Larcenies, which make up virtually all nonviolent felony crimes on the subways, fell by 50.2%. Violent crimes actually rose, both per capita and in raw numbers, from 917 to 928. Overall, the proportion of violent felonies to total felonies rose between 2019 and 2020 from 37.1% to 53.9%. 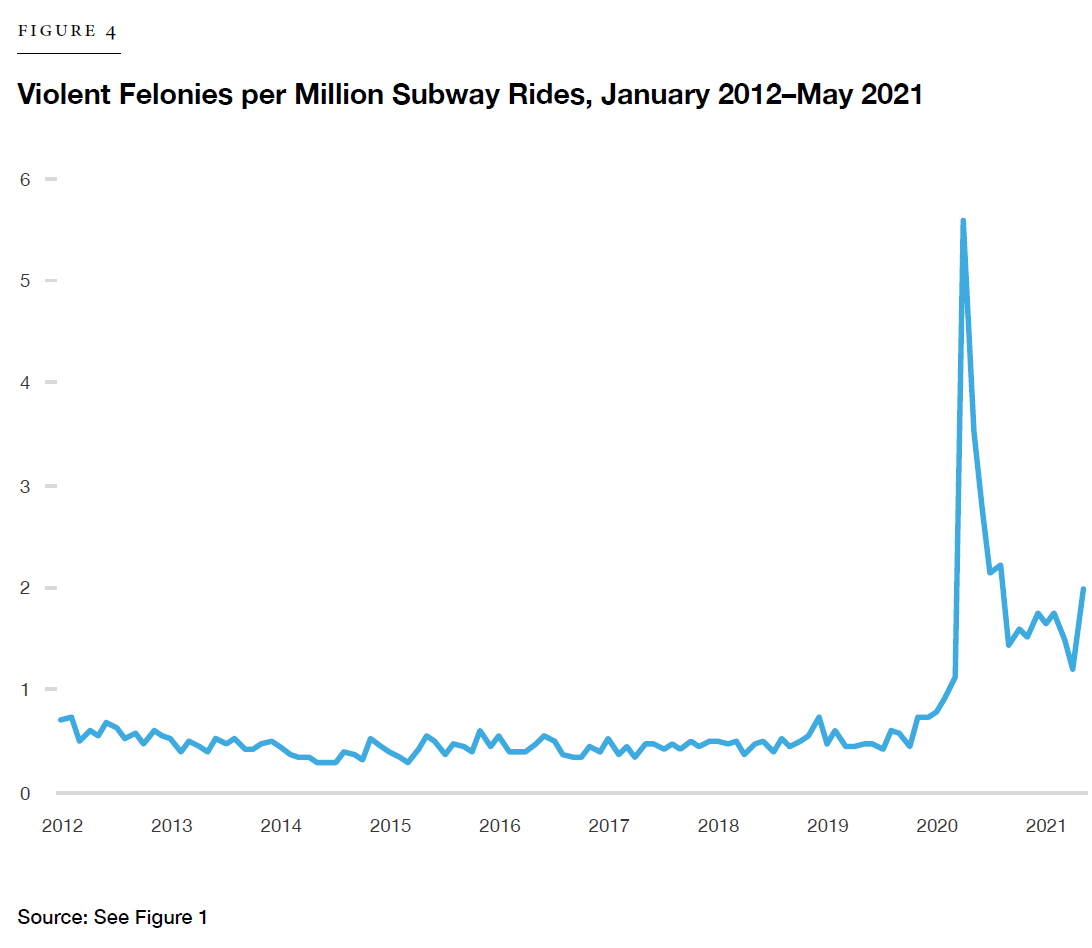 In the half-decade before the pandemic, arrests by the NYPD within the transit system declined significantly (Figure 5). This was partly a function of Bratton’s “peace dividend”: that is, as crime fell, and recidivist criminals learned from experience that fare-beating would be met with a summons or arrest, the need for 1990-level enforcement lessened. However, declining arrests were also a response to political and social concerns. Manhattan, Bronx, and Brooklyn district attorneys largely stopped prosecuting fare-beating and other low-level arrests. Although fare-beating is still a misdemeanor crime, the near-cessation in enforcement was part of a movement by the state legislature, the city council, and city prosecutors to decriminalize many low-level crimes—if not in law, then in practice.[8] 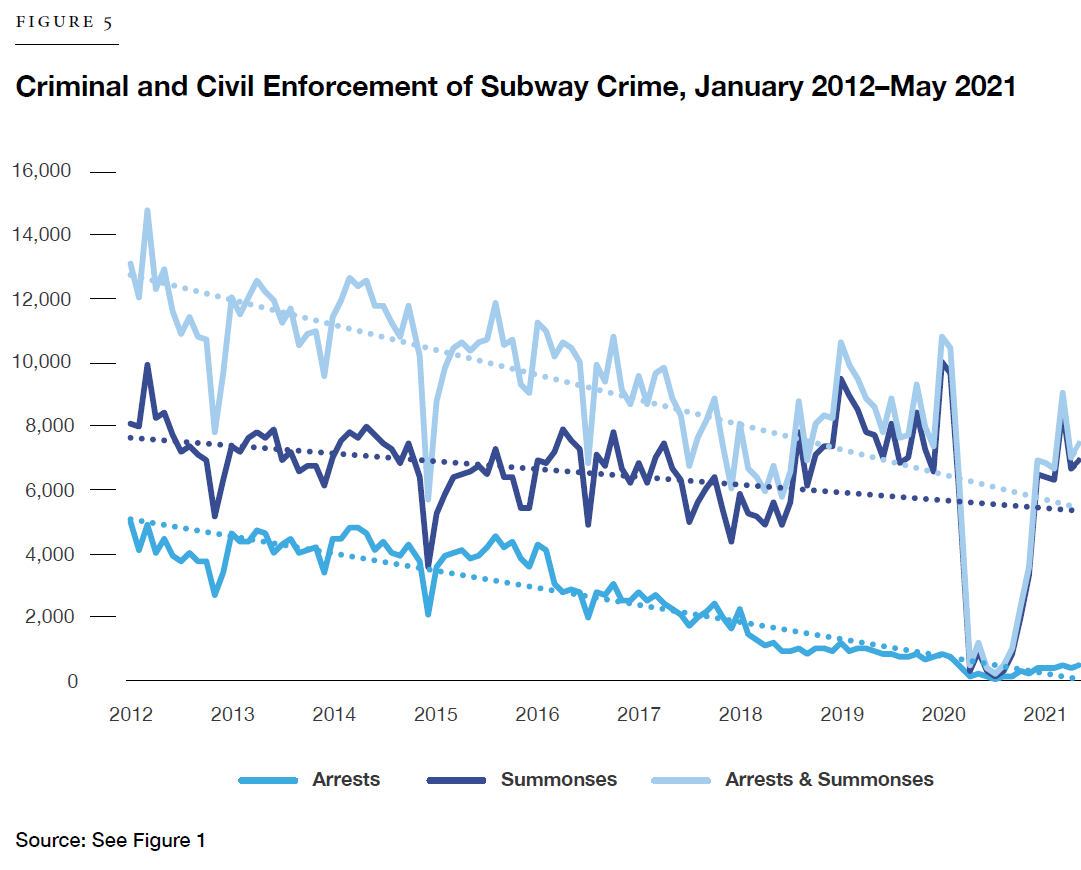 This trend accelerated during the pandemic. In the early months of Covid-19—the spring and summer of 2020—police resources were strained by Covid illness and quarantine as well as diverted to protests and riots. The criminal and civil enforcement of transit crimes fell to nearly nil. From June through September 2020, the police made just nine arrests for fare evasion, down from 850 in the comparable months of 2019. By the early months of 2021, police resumed civil-summons enforcement, albeit at a slightly lower level than in 2019, and arrests remained at modern record lows.

Overall, including arrests as well as summonses, contact between the police department and crime suspects in the subway system remains low. During the first four months of 2021, police made 29,568 contacts with suspects through arrests and summonses, versus 38,947 in the comparable months of 2019, a 24.1% drop.

Though ridership and enforcement of laws and rules in the subway system have fallen significantly, enforcement has actually stayed high, relative to ridership. In 2020, ridership dropped by 62.3% for the full year, but enforcement fell by just 57.6%. In the first four months of 2021, ridership was down 66.5%, compared with last year’s similar time period, but enforcement was down 24.1%.

The correlations among ridership levels, civil and criminal law enforcement, and crime levels are complex and not necessarily intuitive. It might seem natural to think that as ridership fell, police interaction with criminal and civil suspects could have fallen commensurately, maintaining an equilibrium of public safety. Yet there is not a 1-to-1-to-1 ratio among ridership, law enforcement, and crime. Because high ridership itself offers some protection against crime, when ridership falls, police enforcement must go up, not down, to maintain public safety. Thus, falling ridership coupled with falling enforcement has equaled higher crime, and the number of arrests and summonses, relative to violent crime, fell significantly during the early months of the pandemic—and during the first five months of 2021, it has settled at a level lower than the pre-2020 norm (Figure 6). 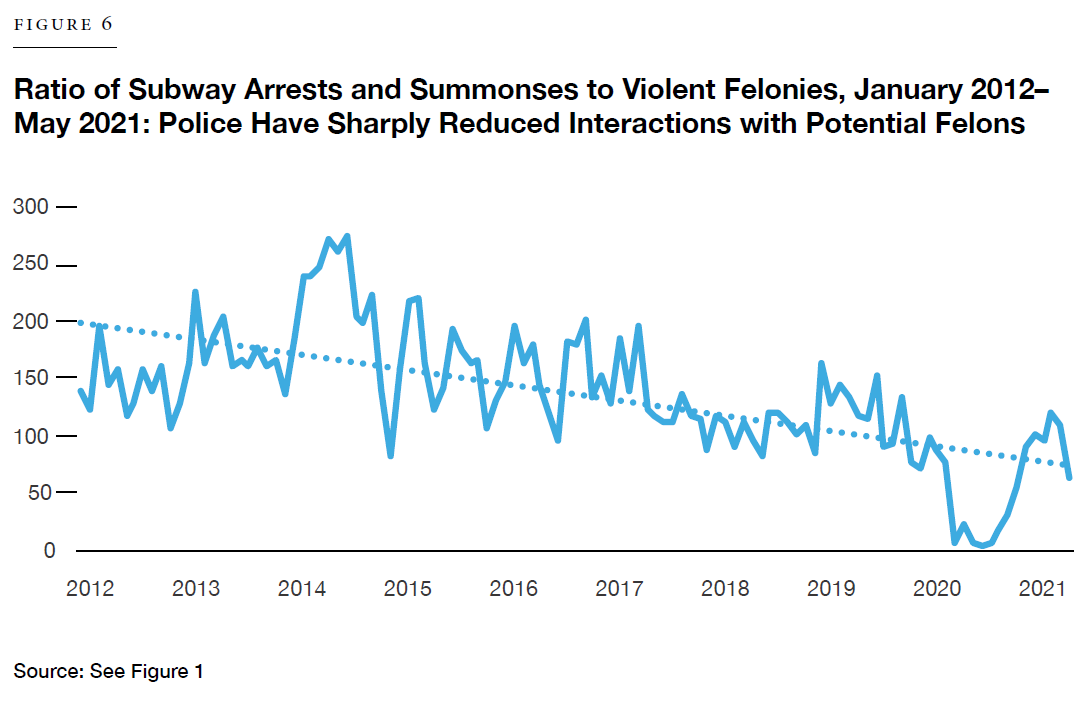 The NYPD is thus interacting with far fewer potential violent felons than it did before the pandemic. These interactions are necessary to deter more serious crimes. Consider that of the 779 arrests that the NYPD made in the subway system in January and February 2021, 51 suspects, or 6.6%, were allegedly carrying guns or knives.[9]

Due to state-level bail reform for suspects, short prison sentences for convicts, and a general trend away from incarceration, the violent suspects whom the NYPD does arrest can end up quickly back on the streets and in the transit system. Over the five arrests made for six of the 10 subway murders since March 2020, four of the suspects, allegedly responsible for five murders among them, had had previous run-ins with the law for alleged or convicted violent offenses. Rigoberto Lopez, the suspect in two February 2021 subway murders, was out on bail at the time of the murders, pending multiple felony and misdemeanor charges.[10] Nathaniel Avinger, the suspect in the March 2020 murder of New York City Transit train operator Garrett Goble,[11] Ramziddin Trowell, the suspect in an earlier March 2020 subway murder,[12] and Todd Hubbard, the suspect in a July 2020 subway murder, all had long criminal histories involving violent felonies.[13]

In a grim way, the past 16 months have allowed a natural and imperfect experiment in subway safety, by drastically altering the variables of ridership and enforcement. The next mayor, as well as the city’s incoming (for Manhattan) and existing district attorneys, should heed the outcome: to prevent violent crime on the subways, enforcement should increase to levels that surpass the increase to date in ridership.

The past shows us a partial way forward. The NYPD should amp up the police presence in subway stations to deter fare-beating, in the case of uniformed officers, and to interdict fare-beaters, in the case of plainclothes officers. The NYPD should also increase its presence on subway platforms and in subway cars to deter rule-breaking such as taking up more than one subway seat and public urination. Such measures, by creating interactions that decrease nonviolent antisocial behavior as well as interactions that result in an arrest for carrying an illegal gun or knife, improve the quality of life and level of public safety on the subways. Law enforcement should begin at the civil level for violations such as fare-beating but escalate to criminal misdemeanor enforcement for individuals who repeatedly fail to respond to a civil summons. The new mayor should also work with DAs on a much more coordinated system of mental-health diversion and supervision for chronic fare evaders who are found to be seriously mentally ill.

Since the high-crime days of the 1980s and early 1990s, proactive policing has complemented high ridership to deter violent crime in the subway system. With ridership indefinitely below pre-Covid levels, the next mayoral administration will need to do more to provide a consistent, predictable deterrent to potential violent criminals in the subways. The state legislature, too, must further reform the state’s bail system to ensure that the alleged violent criminals whom the NYPD do arrest do not return quickly to the transit system.

Nicole Gelinas is a senior fellow at the Manhattan Institute, a contributing editor of City Journal, and a columnist at the New York Post. She writes on urban economics and finance. Gelinas is a CFA charterholder and the author of After the Fall: Saving Capitalism from Wall Street—and Washington (2011).

Gelinas has published analysis and opinion pieces in the New York Times, Wall Street Journal, Los Angeles Times, and other publications. Before coming to City Journal, she was a business journalist for Thomson Financial, where she covered the international syndicated-loan and private-debt markets. Gelinas holds a B.A. in English literature from Tulane University.