“Unless we can make the philosophic foundations of a free society once more a living intellectual issue, and its implementation a task which challenges the ingenuity and imagination of our liveliest minds, the prospects of freedom are indeed dark. But if we can regain that belief in the power of ideas which was the mark of liberalism at its best, the battle is not lost . . .” – F.A. Hayek

The Manhattan Institute is pleased to announce  that Thomas Sowell has won the 17th annual Hayek Book Prize for his book Charter Schools and Their Enemies (Basic Books). MI will celebrate the Hayek Book Prize with a tribute to Professor Sowell at an event in Florida later this month.

Sowell’s book was among four other finalists announced in February:

On May 18, 2020, the Manhattan Institute announced Alberto Alesina, Carlo Favero, and Francesco Giavazzi as this year’s winners of the Hayek Book Prize for their book Austerity: When It Works and When It Doesn’t, published by Princeton University Press.

Sadly, Alesina passed away suddenly on Saturday, May 23, and the Manhattan Institute offers its condolences to his family, friends, and colleagues. Details on the annual Hayek Lecture will be forthcoming.

Austerity was one of five finalists which were announced in March: 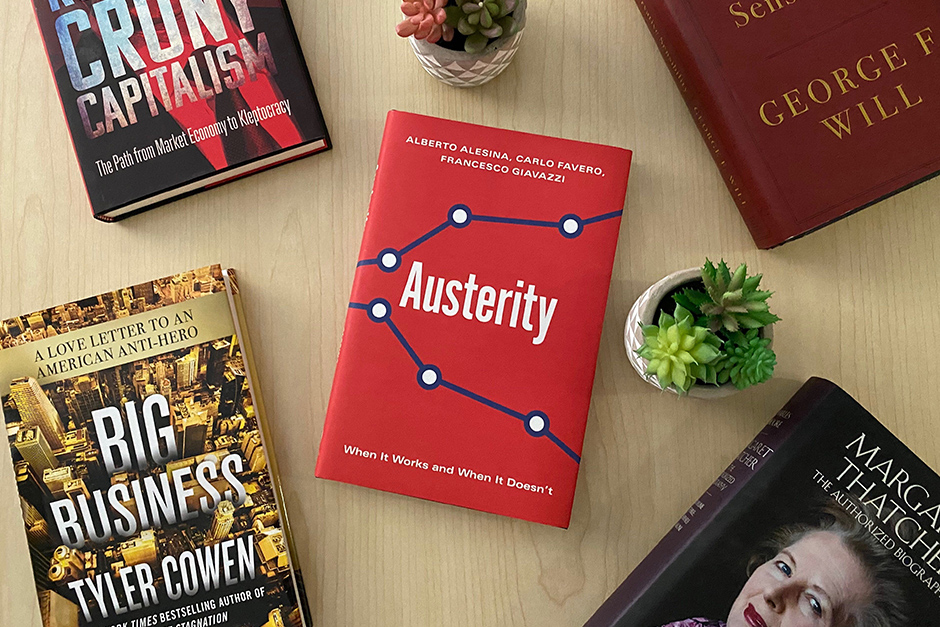 Please contact Yael Hungerford at yhungerford@manhattan-institute.org with any questions.

Political philosopher and Nobel laureate F. A. Hayek, author of groundbreaking works such as The Road to Serfdom and The Constitution of Liberty, was the key figure in the twentieth century revival of classical liberalism. He was also a formative influence on the Manhattan Institute. When our founder, Sir Antony Fisher, asked how best to reverse the erosion of freedom, Hayek advised him not to begin with politics per se but to fight first on the battlefield of ideas. Our Hayek Lecture and Prize affirm and celebrate this mission.

The Hayek Lecture is delivered by the recipient of the Hayek Prize, which honors the book published within the past two years that best reflects Hayek’s vision of economic and individual liberty. The Hayek Prize, with its $50,000 award, is among the world’s most generous book prizes. It was conceived and funded by Manhattan Institute trustee Tom Smith to recognize the influence of F.A. Hayek and to encourage other scholars to follow his example. The winner of the Hayek Prize is chosen from among the nominations by a selection committee of distinguished economists, journalists, and scholars. Past winners include: William Easterly for The White Man's Burden, Amity Shlaes for The Forgotten Man, Benn Steil and Manuel Hinds for Money, Markets & Sovereignty, Matt Ridley for The Rational Optimist, John Taylor for First Principles, Casey Mulligan for The Redistribution Recession, James Grant for The Forgotten Depression, and, in 2016, Philip Hamburger for Is Administrative Law Unlawful?

2020: Alberto Alesina, Carlo Favero, and Francesco Giavazzi, Austerity: When It Works and When It Doesn’t

2019: Douglas A. Irwin, Clashing over Commerce

2015: James Grant, The Forgotten Depression: 1921, The Crash That Cured Itself

SEE ALL PAST WINNERS