Howard Husock was formerly a senior fellow at the Manhattan Institute, where he served as vice president for research and publications from 2006-2019. A City Journal contributing editor, he is the author of Who Killed Civil Society? The Rise of Big Government and Decline of Bourgeois Norms (September 2019), Philanthropy Under Fire (2013) and The Trillion-Dollar Housing Mistake: The Failure of American Housing Policy (2003).

From 1987 through 2006, Husock was director of case studies in public policy and management at Harvard University’s Kennedy School of Government, where he was also a fellow at the Hauser Center on Nonprofit Organizations and an adjunct lecturer in public management. ​His writing has appeared in the Wall Street Journal, National Affairs, New York Times, New York Times Magazine, Society, Chronicle of Philanthropy, Journal of Policy Analysis and Management, Philanthropy, The Wilson Quarterly, and Public Interest​. Husock has written widely on U.S. housing policy, including Repairing the Ladder: Toward a New Housing Policy Paradigm (1996).

A former broadcast journalist and documentary filmmaker for WGBH Boston, his work there won three Emmy Awards, including a National News and Documentary Emmy (1982). Husock serves on the board of directors of the Corporation for Public Broadcasting. He holds a B.A. from Boston University’s School of Public Communication and was a 1981–82 mid-career fellow at Princeton University’s Woodrow Wilson School of Public and International Affairs. 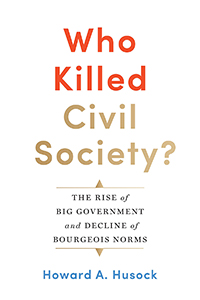