Some donors are applying pressure — but others are fighting back

Can alumni save the American university from the illiberal progressive onslaught? A piece in the Wall Street Journal reports that the country’s alumni are increasingly organising to ‘defund’ their alma maters until they get their free speech houses in order. At Washington and Lee University, an alumni group sent over 10,000 emails to alumni calling on them to suspend donations until the university stopped disassociating itself from its namesakes George Washington and Robert E. Lee.

Twenty new organisations have been formed in the past few years and a new national donor organisation, the Alumni Free Speech Alliance, sprang up in October. This new activism is important: witness the way donor pressure prevented Cecil Rhodes’s statue from being removed from Oriel College, Oxford. But alumni pressure, while valuable, is unlikely to change the direction of travel on campus.

According to Pew, the share of Republicans who say universities have a positive effect on the country fell from 57% in 2015 to 34% in 2021. Donors who populate the new free speech alumni associations tend to be conservative or moderate. They resent giving to universities that prioritise cultural progressivism over free speech, rationality and American nationhood.

Growing attention to culture war issues such as Cancel Culture and Critical Race Theory may be helping to galvanise donor action. ‘This is a battle for our culture and, in many ways, for Western civilization,’ said John Craig, leader of a group from Davidson College, North Carolina. Davidson commissioned a survey which went out to over 1100 donors. Of the 314 that responded, just 20% agreed ‘it is very or extremely clear the school administration protects free speech,’ while 94% said ‘the next president should make protecting free speech and civil discourse a priority.’ This indicates an impressive pool of potential support for the new initiatives.

Yet despite this, there is no sign that the absolute value of alumni contributions to American universities has fallen — even though alumni contributions form a declining share of universities’ total income. Instead, national records show that donations remain static, fluctuating with the economic cycle, as figure 1 shows. Many donors are older and are thus less personally exposed to cancel culture. Status considerations and residual loyalties appear to be more durable than worries about academic freedom or national traditions. 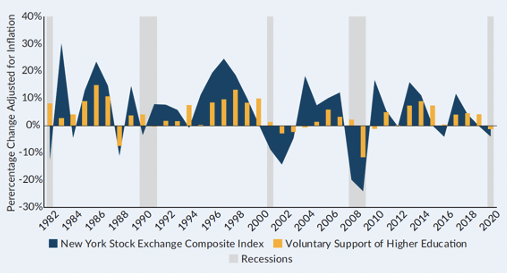 In addition, figure 2 shows that universities are growing more independent of alumni as overwhelmingly Left-leaning foundations such as Ford or Rockefeller have increased their contributions. Moreover, the political profile of elite donors has shifted substantially Leftwards over time. Big business used to give most of their money to the Republicans, but this is no longer the case.

As professions shift Left and the culturally Left-leaning tech sector has become more economically important, big donors are favouring the Democrats. In 2016, Donald Trump raised 70% of his campaign funds from donations of less than $200 compared to just 26% for Hillary Clinton. As if to illustrate this new elite progressivism, a young tech entrepreneur, Husayn Kassai, offered Oriel College to make up any shortfall in donor funding should it decide to remove Rhodes’ statue.

As figure 2 shows, alumni money is important, but has declined as a share of US universities’ takings, from close to 30% of voluntary contributions in 2006 to 22% in 2020. Meanwhile, foundations, who largely support the Equity, Diversity and Inclusion (EDI) agenda, have been rising in clout.

Conservative and classical liberal donors will need to get more organised and convince a larger share of their associates to withhold their cash if they are to dent the rising force of woke culture in universities. More broadly, government-led reforms like Britain’s Higher Education Freedom Bill alongside new free speech universities like the University of Austin, Ralston College or Britain’s University of Buckingham will be more important in restoring academic freedom to our illiberal campuses.