Reforming Financial Regulation After Dodd-Frank is the very best analysis of the general problem of financial regulation and the 2008 financial collapse that has been written.

Post-2008 financial regulatory changes largely have been a failure. They have produced high compliance costs, while constructing regulatory mechanisms that are unlikely to achieve their intended objectives. Furthermore, financial regulation increasingly has adopted processes that are inconsistent with adherence to the rule of law, which not only threaten the fundamental norms on which our democracy is founded but also undermine the effectiveness of regulation. The combination of high costs, ineffective mechanisms, and inappropriate processes reflects a neglect of the core principles that underlie successful financial regulation. This study reviews the shortcomings of current regulatory practice, identifies the principles that should guide our regulatory architecture, and suggests reforms that are consistent with those principles. Download your copy here.

“Reforming Financial Regulation After Dodd-Frank is the very best analysis of the general problem of financial regulation and the 2008 financial collapse that has been written. Calomiris shows that much of the increased regulation will have little effect on failure risk. He also shows that more effective rules were available but not adopted.”

“In this compact and timely monograph, Charles Calomiris identifies weaknesses in the post-2008 financial regulatory reforms, develops a core set of principles that should guide the design of the financial regulatory architecture, and makes detailed proposals about how to improve the current regulatory system and make it consistent with these principles. His characteristically lucid prose and trenchant analysis enable the reader to follow his logic every step of the way, to a set of carefully designed proposals that would enhance the effectiveness and reduce the compliance costs of financial regulation.”

“Charles Calomiris’s new book is an important set of ideas for reforming financial regulation. He rightly emphasizes three points about the regulatory wave since the crisis: it is ineffective to prevent another crisis, carries high cost to financial institutions and the economy, and departs from the rule of law. I urge policymakers to consider seriously his recommendations for remedying this situation.”

“Calomiris is a thought leader on the relationship between governments and banking systems. With a sword in one hand and a scalpel in the other, he slices up the 2010 Dodd- Frank Act. Then he takes up hammer and chisel to inscribe ten new commandments of regulation as the basis for productive government–banking system interactions. This is a handbook for all of us working on the reform of Dodd-Frank’s bureaucratic efflorescence.”

“There were books about the Dodd-Frank Act when it was signed into law and innumerable academic articles about one or another provision, but it took Professor Charles Calomiris to sum up why Dodd-Frank has been a failure as a reform measure. Reforming Financial Regulation After Dodd-Frank should be on every desk in Congress and read carefully by anyone who is puzzled by the U.S. economy’s failure to recover its customary vigor after the 2008 financial crisis.”

“Charles Calomiris is an astute and experienced observer of financial markets and regulations. He has thought carefully and creatively about how to rethink our approach to regulating financial institutions. In this book, he offers a number of fundamental changes to existing legislation to make regulation more effective and more efficient.”

Charles W. Calomiris is the Henry Kaufman Professor of Financial Institutions and Director of the Program for Financial Studies, Columbia Business School. He is also a research associate at the National Bureau of Economic Research, a book fellow at the Manhattan Institute, the principal investigator for the Manhattan Institute Project on the Costs and Benefits of Bank Regulation Since 2008, and codirector of the Hoover Institution Program on Regulation and the Rule of Law. 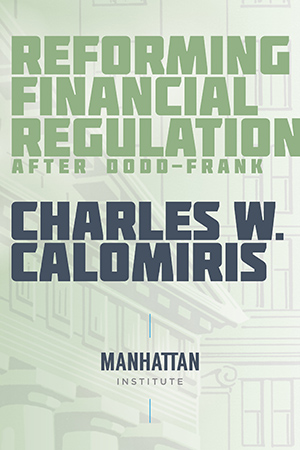